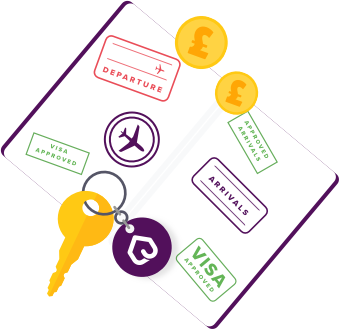 Moving to France From the UK

Many people who visit France become intrigued with the relaxed way of life, great food and obvious passion. This is why many Brits decide to uproot their lives and begin moving from the UK to France.

However, moving abroad is no small challenge. Where to live, where to work, how to get around and how the healthcare system works are all points to consider when booking your removal to France.

In this article, we look at all the vital factors you’ll need to take into account before booking your international house move.

What is the Cost of Moving to France From the UK?

When moving to France, you’ll have to calculate the cost of moving the items you’re taking with you. You’ll be able to choose from the following shipping methods:

However, if you choose to use air freight when transporting your goods, the average cost changes to £185 per 100kg.

For more information, read shipping container costs from the UK to France.

Best Places to Live in France

Over 200,000 British expats currently live in France. Some of the most popular locations for British expats are in southern France due to the beautiful weather that occurs almost all year round. However, there are many other areas in the country that you can explore.

According to data by France’s National Statistics Agency INSEE and the online English language French newspaper, The Local, the most popular locations for British expats are:

The Île-de-France region of France is highly popular, primarily due to this area being the location of the capital of the country: Paris. There are many reasons why Brits move to the Paris area, not least because it’s a hub of business and culture.

Housing in Paris can be very expensive and, like most cities, range from small apartments to grand mansions. There are around 12 million inhabitants in the area and approximately 944,000 businesses.

Situated in West France, Poitou-Charentes is now part of Nouvelle Aquitaine. Research shows that there are around 16,000 British expats living here, making up 33% of foreign residents living in the area.

One of the largest and most successful industries in Poitou-Charentes is the making of brandy. This has increased the need for workers, providing British expats with plenty of local opportunities.

Aquitaine is located in the southwest of France with the most popular attractions including The Water Mirror, Place de la Bourse and St Andre Cathedral. It is the 6th most populated region in France.

Aquitaine is also home to one of the largest cities in the country, Bordeaux. This city is famous for its wine and notable residents, including French writers, sportsmen and musicians.

Now part of the new Occitanie region of France, Midi-Pyrénées is home to the 4th largest city in the country: Toulouse. As Toulouse is full of culture, attractions and famous landmarks, it’s a major factor that persuades many Brits to pack up and leave for Midi-Pyrénées.

There is also a range of first-class colleges and universities in the city, making it France’s 4th highest area for the student population.

With approximately 13,500 Brits living in the area, Brittany is another popular location. The region borders the English Channel and contains some of the oldest architecture in the world.

Barnenez Cairn is one of the most notable historic sites, dating all the way back to 4800 BC.

Cost of Living in France

France is renowned for its expensive living costs, but it does depend on your specific location. According to Numbeo, the overall cost of living in France is around 9.93% higher than in the United Kingdom.

Taking the latest data from Numbeo, we’ve created a table that lists some of the basic costs you’ll be faced with when moving to France from the UK:

Moving to France After Brexit

Due to the UK leaving the EU, the rules have changed on residency in France. When moving to France from the UK, you’ll need to submit an application for a long-stay visa. This will allow you to stay in the country for over 90 days and costs around €99.

When applying for this type of visa, you will need:

If your application is successful, you’ll have a year to apply and obtain a residence permit.

For more information, read all you need to know about visas.

According to INSEE, in 2016, 55,000 Britons living in France were employed. Understanding the opportunities available to expats is key to helping you understand your potential career path.

As native English speakers, there are likely a great number of opportunities for teaching English as a foreign language in France. Equally, in the south of the country, there is a buzzing tourism trade, which means more opportunities for working in hospitality.

However, if you’re looking to improve your skills and increase your chances of being employed, you may want to consider learning French. It’s a serious advantage when applying for work.

France is renowned for its excellent healthcare system. In 2017, the government institutionalised the Protection Universelle Maladie (PUMA). It is a state-controlled social security system that is funded by a variety of things such as income tax and employer payroll taxes.

This new system grants automatic healthcare to anyone who legally resides in France. This is based on the requirement that you have lived there for 3 consecutive months and are a permanent legal resident. It covers around 70% of GP and dental costs, 80% of hospital fees and sometimes up to 100% of medication costs.

If you do not meet the requirements, then you’ll have to pay for private healthcare insurance or pay for your healthcare needs in full. Some permanent residents will still take out private health insurance to cover the remaining costs, however.

Your British vehicle can be imported to France for up to 6 months. If it’s kept in the country for longer than 6 months, additional taxes may need to be paid.

Before importing your vehicle, you’ll need to change the headlights so they meet French standards and check if your speedometer has a km reading. If it doesn’t, you’ll need to get this fitted.

On arrival, you’ll have to contact the local customs office and obtain an 846 A certificate. You may then be required to book your car in for Control Technique and apply for your Carte Grise. Once this has been obtained, you can request your French number plates.

As the UK has officially left the EU, you will be required to apply for a French driving licence unless it was issued before January 1st 2021.

When moving abroad, it’s a good idea to understand what options there are for public transport. Transport links in France, especially in the major cities, are considered excellent.

There are also excellent rail links, although most are Paris-centric, running to and from the capital.