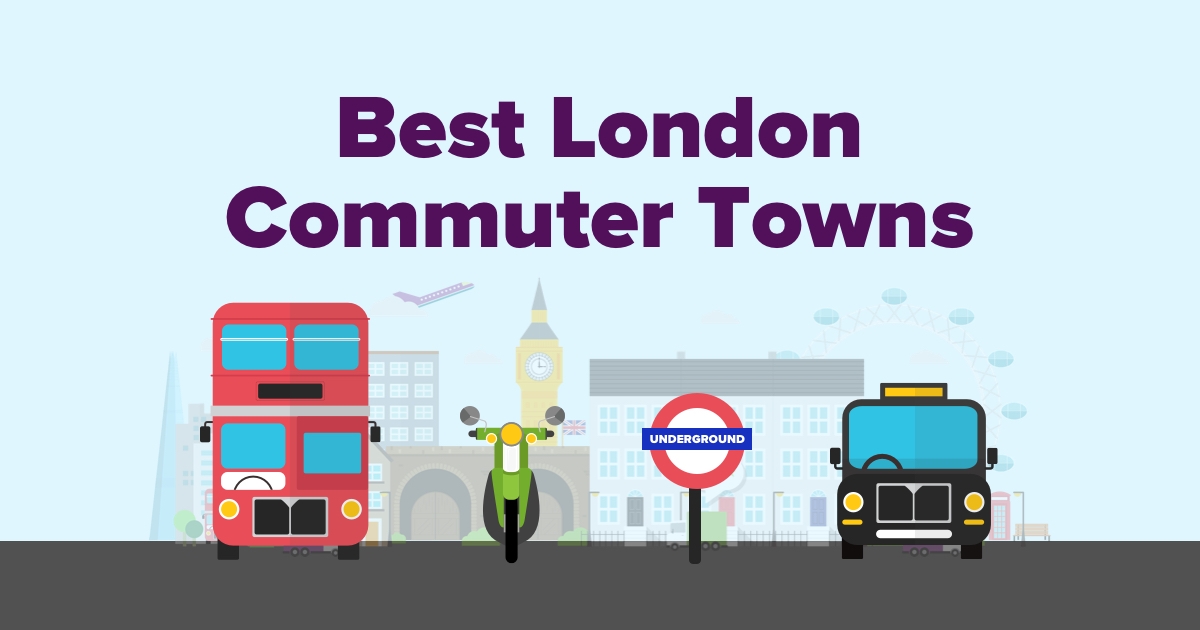 Over the last year, the average price of properties within London was £636,199 according to Zoopla. London is known for being the most expensive area in the UK and so it can be difficult finding a home within the capital that’s also within your budget.

This is especially daunting for first-time buyers saving up for their first home. According to the UK House Price Index, the average price paid by first-time buyers in London during February 2019 was £400,645. This may be lower than the overall average property price but it can still be a difficult goal to achieve when you’re taking your first steps onto the property ladder.

Due to these high prices, many are deciding to live outside of London, making the daily commute instead. To make your London removals as stress-free as possible, we’ve created a list of the best London commuter towns, including property and rent prices as well as distance and travel costs.

If you’re considering moving to London, it’s recommended to also research the towns surrounding the city as the property prices are often much cheaper. To help with your search, we’ve compiled a list of the best and cheapest London commuter towns, providing you with the average price paid over the last 12 months as well as the annual travel cost.

All data has been taken from Zoopla and National Rail, correct as of April 2019.

Situated in Essex, Purfleet is our number one best London commuter town as the property prices can suit almost any budget with some of the cheapest rates possible. It’s located on the River Thames and is best known for its historical port and storage location for the British military. Purfleet was also home to one of Dracula’s estates in the iconic Bram Stoker novel.

By commuting by car, you can reach London in just over an hour via the A13 depending on traffic. To cut this time down further, you can catch a train to reach the city within just 30-minutes. Taking the train is often recommended as it’s a quick and fairly cheap way to commute.

Another town in Essex, Tilbury is around an hours journey to London, offering a variety of properties from large 3-bedroom houses with an average asking price of £269,071, to smaller 1-bedroom flats currently priced at £129,000.

2-bedroom houses in Tilbury currently have an asking price of £236,667 which is drastically cheaper than the average price first-time buyers spent in London last year. With the Help-to-Buy scheme extended until 2023, even first-time buyers can have an easy time searching for a home whilst also being able to afford the price of commuting to London.

If you’re going to catch the train from Tilbury Town Station, you’re looking at an average journey of 40-minutes until you reach the capital. There’s also the option of driving via the A13, which will take you just over an hour.

Next on our list of the 10 best London commuter towns is Chatham in Kent. With a frequent train service to London, Chatham is a great commuter town, 33-miles South-East of London. From beautiful Georgian houses to large, detached Victorian properties, there’s plenty to choose from and call home.

With 3 universities situated nearby, there’s a high number of shared houses available that are perfect for students or graduates living in London but looking to commute. Chatham is also popular with first-time buyers due to the easy commute and affordable property prices, with 2-bedroom houses currently priced at £197,899.

Chatham is an hour and a half drive to London with the option of either using the A2 or the A20 to drive through. For a quicker journey, catching a train will take you between 40-50 minutes to reach the city.

Basildon is a town in the county of Essex, 32-miles East of London. It has excellent rail and road links, making journeys easier for commuters. The centre of Basildon is populated by 1960s 'Brutalist' architecture but there are also 20th-century properties available to purchase with 2-bedroom houses currently averaging at £255,920.

For those looking to keep active, Basildon Sporting Village is very popular, containing swimming pools, 8 sports halls, an indoor climbing wall and a never-ending number of activities that visitors can try. Local residents also have the opportunity to attend or even star in local productions at the Towngate Theatre for extra entertainment.

If you’re using the A13, it can take an average of 1 hour and 20-minutes to drive to London from Basildon. To drastically cut this time down, commuters also have the option of catching a train to London which will take just over 30-minutes.

Another London commuter town in Kent, Gravesend is next on our list. With Pocahontas’ final resting place situated here, there’s plenty of history and intriguing sites to explore. With a mixture of Victorian, Edwardian and new build properties to view, you’ll find it difficult to choose between so many potential homes.

Gravesend is a highly-popular commuter town with a multicultural community and many excellent schools to attract families. There are a variety of sport and leisure activities to choose from and the community spirit is forever growing as more and more people become locals.

Gravesend is an hour and 15-minutes journey from London by car. Another option is to catch a train to arrive between 20-50 minutes depending on which train station you choose.

In 2018, Dartford was ranked as the 7th best place to live in Kent by the property tech firm, One Dome. It was highly praised for its local schools and education as well as its lifestyle and nightlife. There’s a range of new build homes and modern apartments to view as well as larger family homes.

Just an hours drive to London, Dartford is a fairly easy commute with mainline stations allowing you to have a quicker journey.

With an annual ticket costing £3,280, you could reach London within an hour if you catch a train from Dartford for your commute. There’s also the alternative of driving via the A2 which will also take just over an hour, depending on the traffic.

A well-connected town in Hertfordshire, commuting from Cheshunt to London takes an average of 30-minutes by train. Kid Mania has a brilliant soft play area for parents to take their children and there are a number of well-respected schools within the area.

There are a bunch of quirky pubs to have food, all with great outdoor seating during the days we finally see the rare British sunlight. For those who may be interested, Victoria Beckham studied at St Mary’s High School in the town whilst double Olympic Gold Medal cyclist, Laura Trott also lives here in Cheshunt. The more you know!

If you’re driving to London from Cheshunt, be wary of the traffic during your journey as the average time it takes is around 1 hour and 15-minutes. However, the quickest route would be to take the train from Cheshunt Station to arrive within 30-minutes.

With 2 railway stations under London Zone 2, Waltham Cross is a well-connected commuter town with a direct link to the M25 motorway. 2-bedroom houses currently have an asking price of £319,540 making it a highly affordable place to live. With regular French and farmer markets, it’s the perfect place for foodies to become locals.

With a 30-40 minute train journey to London, High Wycombe is next on our list of the best London commuter towns. Even as far down as number 8, High Wycombe still offers more affordable renting prices than the cheapest areas to rent in London, meaning you could save more money by committing to the commute.

Located directly between Oxford and London, High Wycombe is the second largest urban centre in Buckinghamshire. Popular amongst young professionals and families, there are a variety of beautiful green spaces as well as a few highly-rated schools to suit your children’s every need.

High Wycombe is a 30-40 minute commute to London via the train, or alternatively, you could drive using the M40 and A40 to reach your destination within an hour and 15-minutes.

Situated 17-miles North-East of London, Broxbourne is our last London commuter town. 1-bedroom houses have a current asking price of £187,500 whilst 2-bedroom houses are priced at £386,498. These prices are much more affordable than those available in London, offering future residents an easier step onto the property ladder.

All prices have been taken from Zoopla, UK House Price Index and National Rail. Correct as of April 2019.

Saving Money on Your London Move

Whether you’re considering moving to London or further afield, Compare My Move can help you save up to 70% off of your removal costs by connecting you with up to 6 local and reliable removal companies in your area. Just fill out our quick and easy form to get started!