In this article, Compare My Move explore the future of 3D printed housing, highlighting how this emerging technology is the solution to many problems faced by the homeowners and the construction industry alike. It may be some time before Compare My Move helps house movers move between two 3D printed homes, but you'll be surprised to learn how close a 3D printed future is.

But what even is 3D printed housing? Simply put, the technique involves 'printing' houses through layer upon layer of concrete ink. This technology could alleviate the housing crisis with affordable 'print-on-demand' homes; provide fast and permanent shelter in disaster-hit areas; make construction a safer and cleaner industry; and even lay the foundations of colonies on the Moon and Mars.

But if this all sounds a bit space-age, know that even now 3D printed houses are a reality. A range of institutes and companies are researching a range of applications for the technology. But where has 3D printed construction been, where is it now, and where will it be in the future? Luckily, Compare My Move is here to explain, with the help of a brand new infographic.

The future will be 3D printed, and here's why... 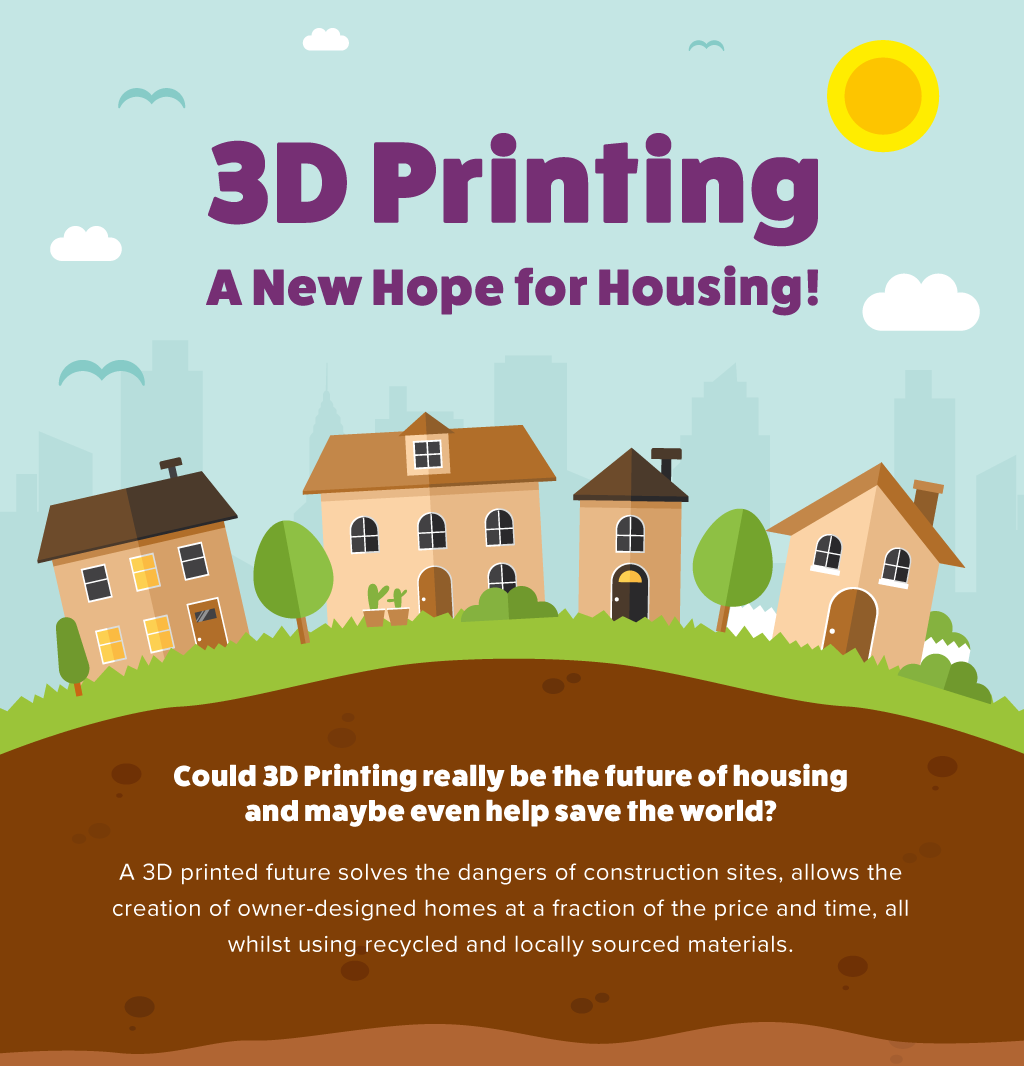 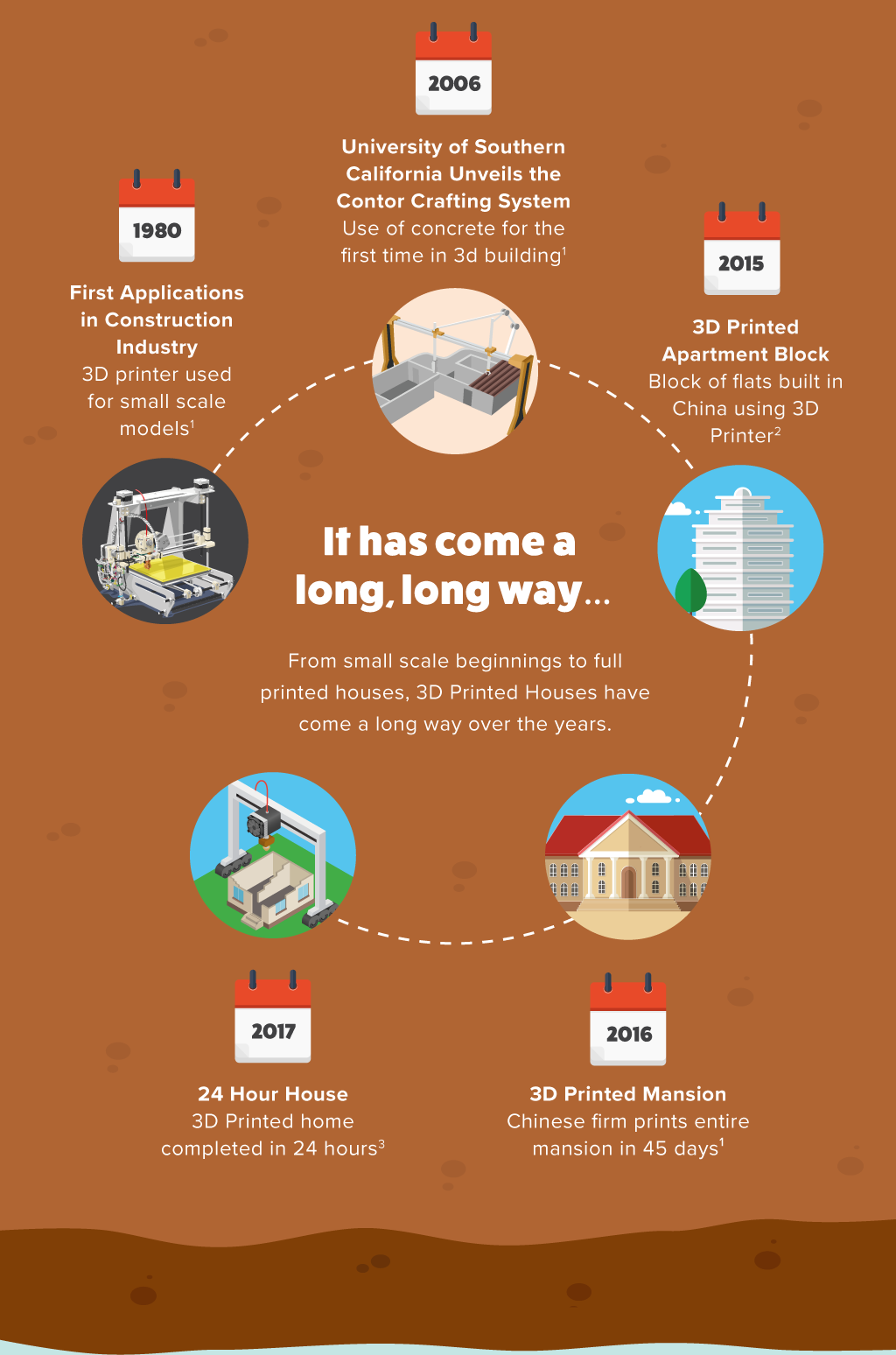 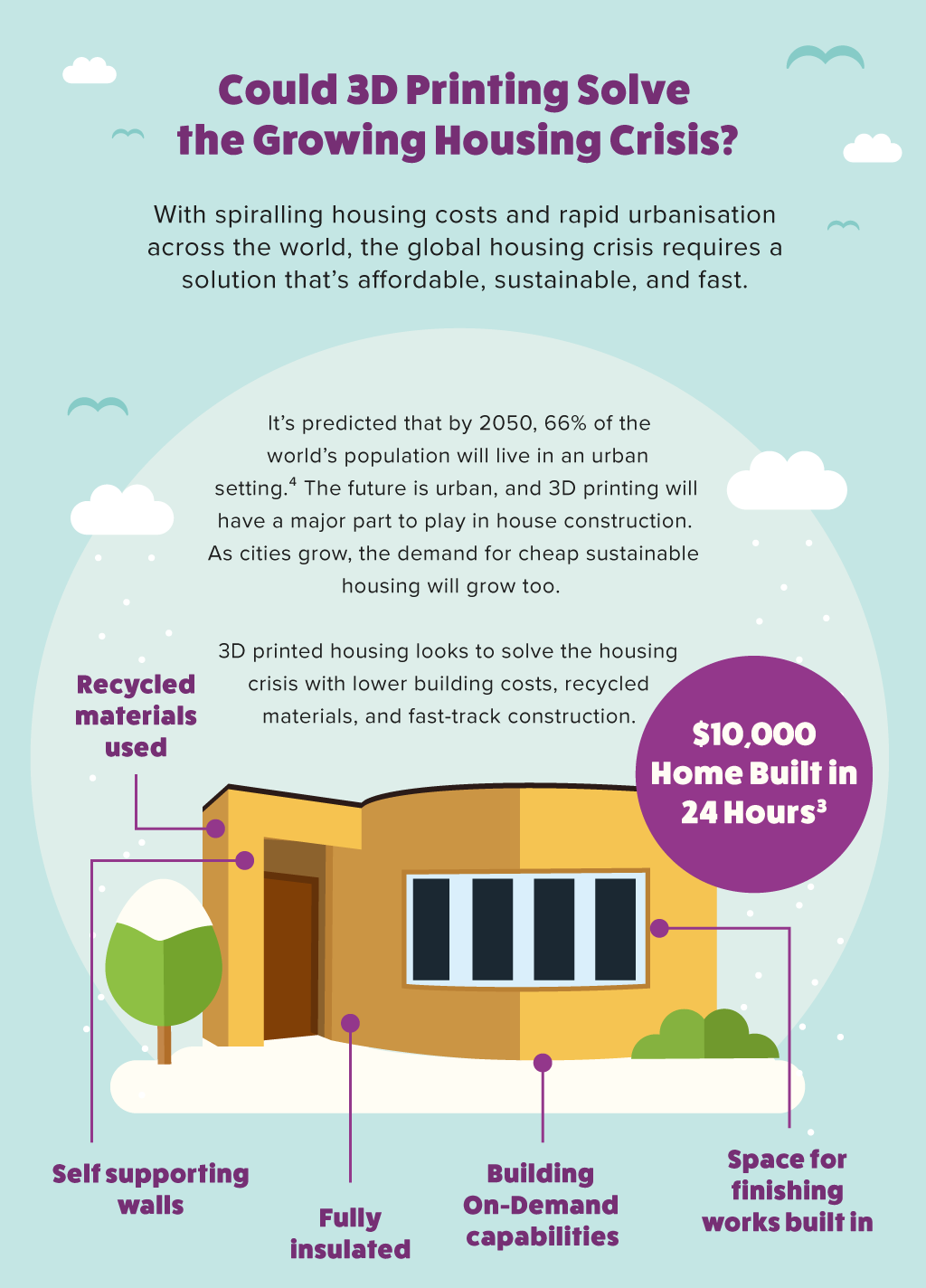 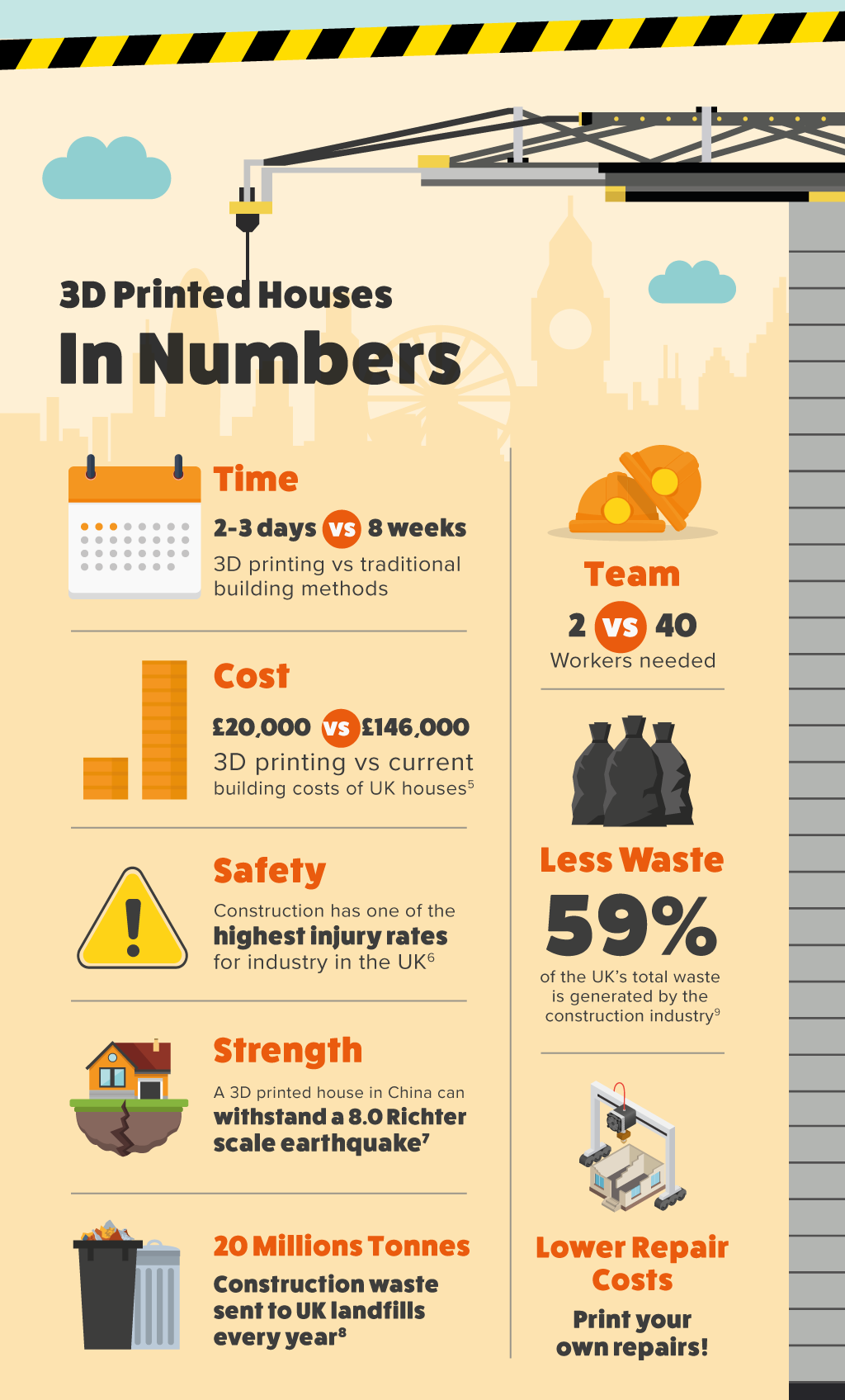 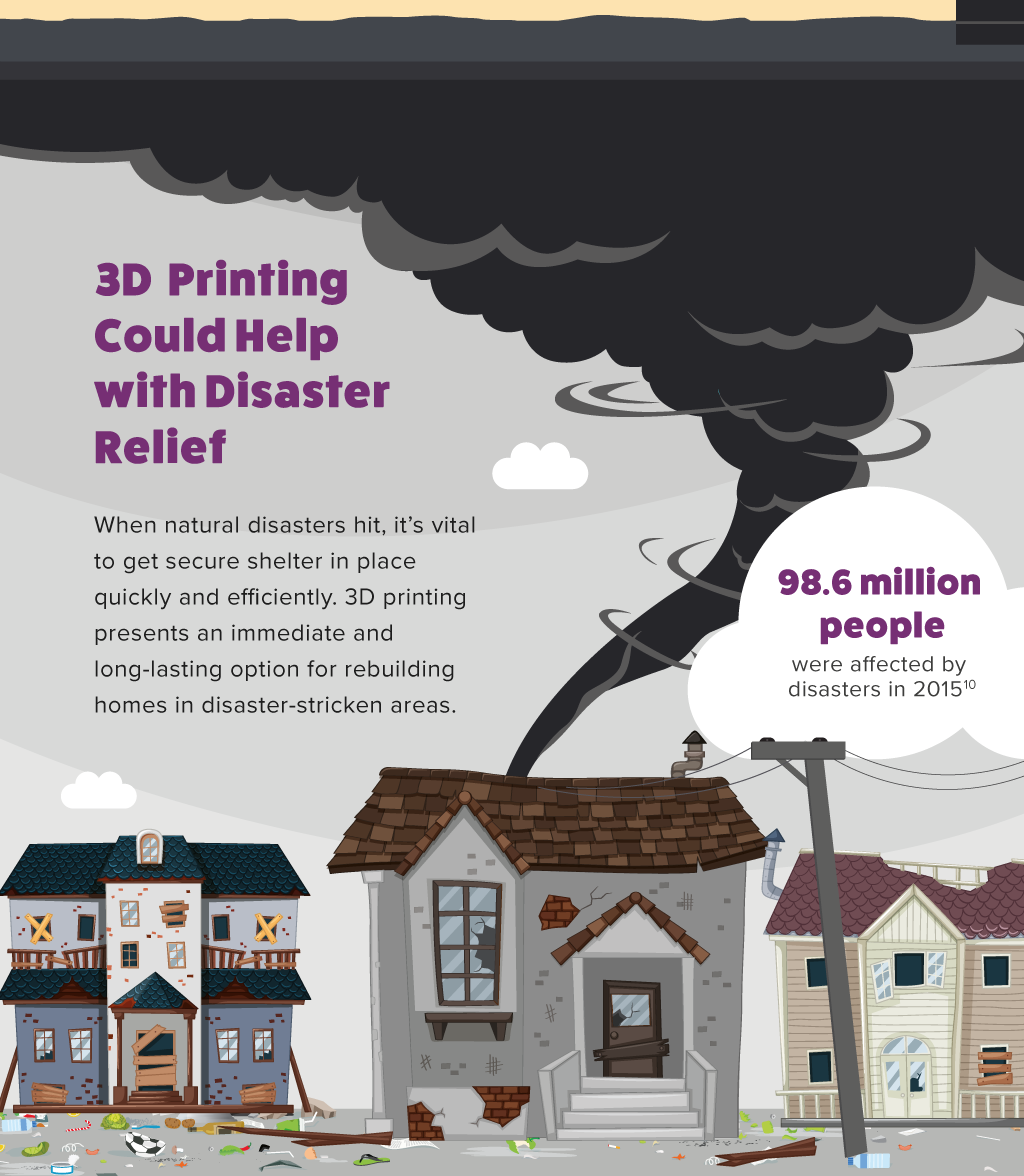 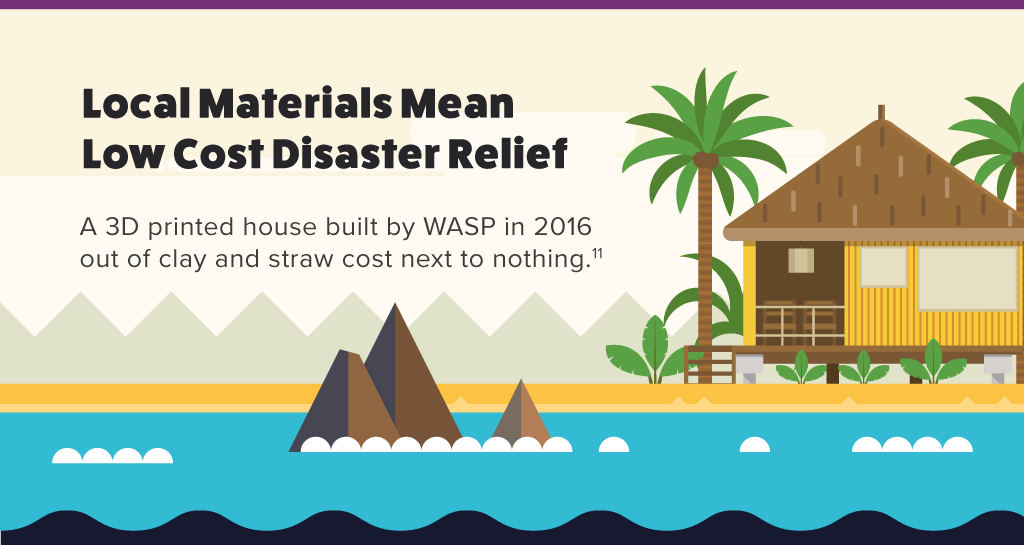 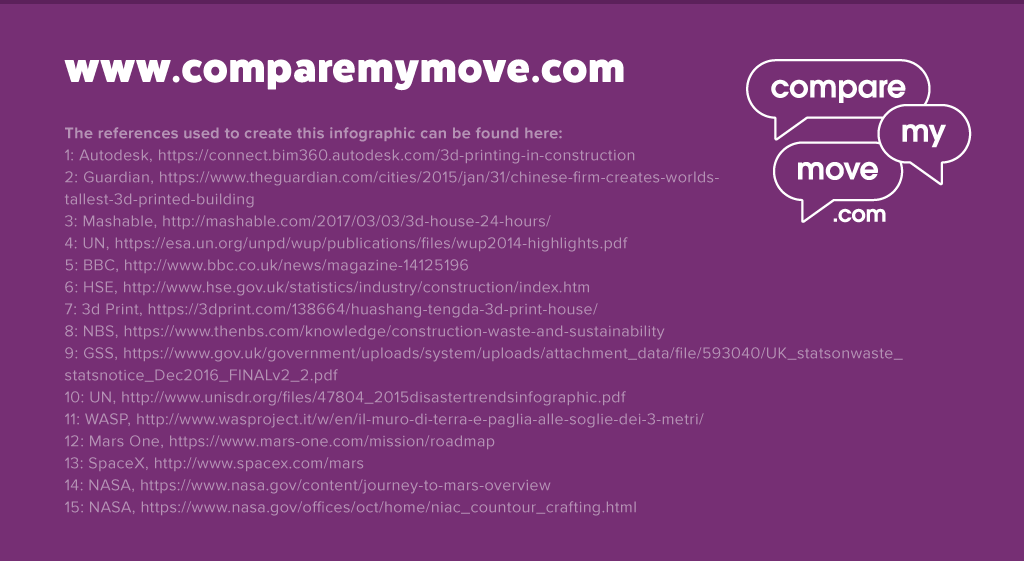 The Benefits of 3D Printed Houses

Let's start at the beginning: why exactly would 3D printing a house be better than traditional methods? The answer lies in cost, speed, and waste. 3D printed building times are rapid in comparison to traditional methods, with a small 3D Printed house being finished in less than 24 hours for less than $10,000 in 2017. Current estimates put the time to print the standard sized UK house at 2-3 days, compared to the 8 weeks for traditional methods.

3D printing is also safer. Construction already has one of the worst injury rates in the UK, so smaller scale 3D Printed construction (2 workers needed vs 40 workers for traditional methods) drastically lowers the risk.

Another major issue is the creation of construction waste with traditional methods. In fact, 59% of the UK’s total waste is generated by the construction industry: that’s 20 million tonnes sent to landfills every year. 3D printing can help tackle this issue as its process is by default efficient, with very little excess waste. Plus, companies are even using recycled building materials in the concrete 'ink' for the 3D printers.

3D Printed construction has come a long way since it's first applications nearly 40 years ago. It was in 1980 that 3D printers were first used in the construction industry, but at this point were producing small scale models. The proof of concept however, was there.

Fast forward to 2006, when the University of Southern California unveiled the 'Contor Crafting System'. The idea behind this system is that, like smaller scale 3D Printers, the building is printed by adding layers and layers of material. The importance in this date is that it was the first time concrete was the material used in this process. The stage (and concrete) was set.

Next up in 2015 and 2016, a Chinese firm 3D Printed an apartment block and mansion using a cement made from recycled materials. The mansion was finished in 45 days. Last year in 2017, a small house was 3D Printed in under 24 hours for less than $10,000, proving its print on demand functions.

The Future of 3D Printed Houses

We've seen where the technology currently stands, but what does the future hold for 3D printed houses? And what issues will the technique help solve? Well, the cost of housing for starters.

The world is seeing an unprecedented urbanisation. In fact, according to the latest UN Estimates, It's predicted that by 2050 66% of the world's population will live in an urban environment. The fast and on-demand capabilities of 3D printing will be well suited to flexibly meet this growing demand.

In the UK, a housing crisis looms as first time buyers are priced out and house prices outstrip wage increases. The lower construction costs and fast build-times mean 3D printing houses are well suited to provide rapid relief to this housing crisis. The recent estimated costs of a 3D Printed house is below £20,000 compared to the average building cost of a UK house at £146,000.

Natural disasters have a huge impact on nations across the world, with as many as 98.6 million people affected by disasters in any given year. After disaster strikes, the race is on to rebuild and provide long-lasting shelters in the stricken areas. 3D printing may be the answer to providing fast and strong shelter in disaster-stricken areas.

The 'print on demand' capabilities of 3D Printed houses are the main winner of this technology, as relief to disaster areas can be expedited. With research underway into using locally sourced and simple materials in 3D printing, less time can be spent ferrying building materials and more time can be put into providing shelter.

3D Printing will Lead the Way to the Stars

The space race is still on, and the scope has only gotten bigger. From Elon Musk’s SpaceX to NASA, public bodies and corporations alike are looking to the next stage of space conquest: colonies on the Moon and Mars. This may sound like science fiction, the reality is closer than we think: the Mars One organisation aims to have a permanent colony on Mars as early as 2032. But in all of these grand plans, what part will 3D printers play?