Getting More House Space for Your Money 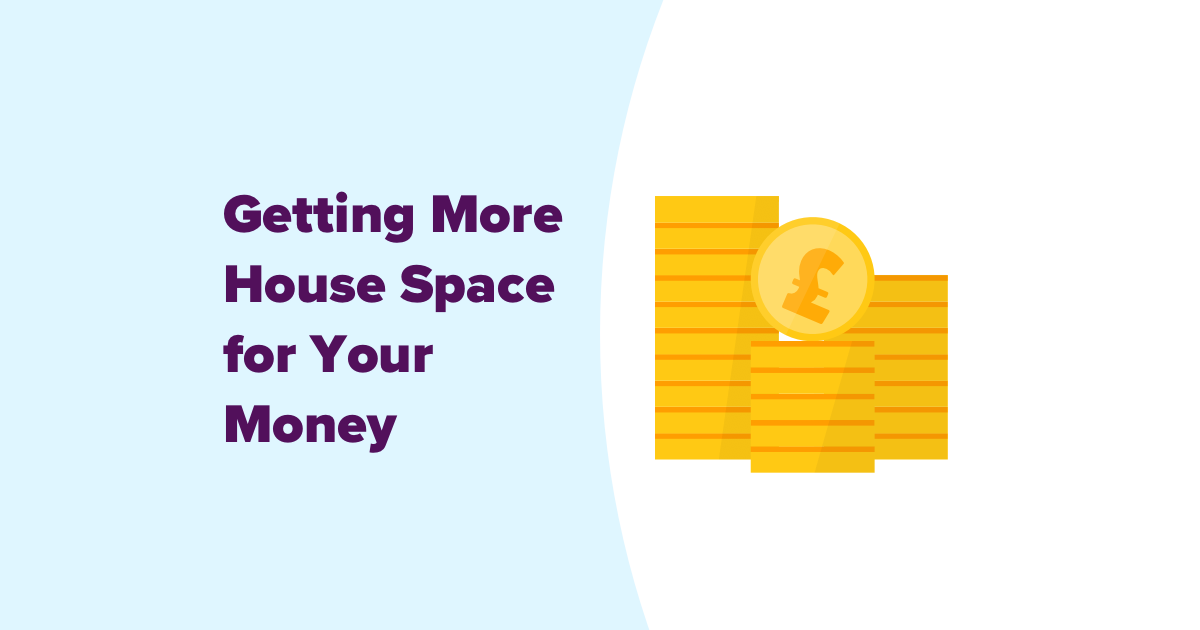 When you're looking to buy a house, having enough space within your four walls is vital: no one wants to pay for the privilege of living a cramped life. So where can homeowners get the most space for their hard-earned money?

The latest data from property website Zoopla has revealed that the average property in Britain now costs £211 per square foot, an increase of 26% (£44) over the last five years. Using figures from Hometrack, Zoopla has found that in many areas of Britain, space is at an absolute premium.

So read on to find out which British regions and areas will give you the most house space for your hard-earned money, and discover just how expensive one square foot of property can get.

Where Can You Get The Most Space For Your Money?

The answer is Blaenau Gwent in South Wales. The area offers the lowest average price for space for prospective homeowners, with an average cost of just £79 per square foot. But all that potential space isn’t going to waste, as the price has increased by 10% since 2012.

In second is Burnley in Lancashire at £87 per square foot, which has decreased by 3% since 2012.

These are areas that savvy prospective buyers can get the most space for their money, with the potential of buying a much larger house than in other more expensive areas.

Where is The Most Expensive Square Foot of Property?

And how expensive can a square foot even be? Well, topping Britain is London’s royal borough of Kensington and Chelsea, where properties cost an eye-watering average of£1,382 per square foot. The price has boomed since 2012, increasing by 29% over the last 5 years.

Outside of the capital, Elmbridge in Surrey has the highest price per square foot at £495, an increase of 36% from 2012. These are locations where space is at an absolute premium, so think about your expectations for your dream house if you're looking to live in these sought-after areas.

Find below the most expensive areas per square foot of property.

Which Area Will Give You The Most Value For Money?

Now let's look at the different regions of Britain, and discover where house owners can get the most value for their money. The North East comes out as the cheapest, as the average price per square foot is £124, a rise of 3% over the last five years. Second cheapest is Wales with an average square foot of £137, with an increase of 9% since 2012. If you're looking to up-size within a budget, moving regions could be the best way to do this.

What Does This Mean for Home Buyers?

Knowing the average cost per square foot of properties in different areas can be a great tool when researching your house move. Alongside the many other important factors you must consider when looking for your dream house, the actual size of the living space is vital. Plus, in the current housing market, it's important to know how far your money will go.

Spokesperson for Zoopla Lawrence Hall said: "Analysing property prices per square foot is an effective way of seeing where you can achieve the most space for your money and can help steer you to areas you may want to focus your property search on, depending on your budget.

“The home counties have performed very well since 2012 in addition to some London boroughs, such as Newham and Waltham Forest, which have seen increases of over 80 per cent per square foot. This is no doubt in part due to the significant investment regenerating the area for the London Olympics.

"However, if you’re looking to maximise the amount of space possible on a budget, you should look to the Midlands and North to ensure best value for money.”

Save With Compare My Move

Regardless of the space or size of house involved, Compare My Move can help you save time and money finding a removal company.

Every year, we help thousands of movers save up to 70% on moving costs by pairing them up with up to 6 local removal companies. Just fill in a free, simple form and make Compare My Move work for you.

You can get started today with expert tips and tricks by looking through our home removal guides.