6 Reasons to Move From London to Glasgow 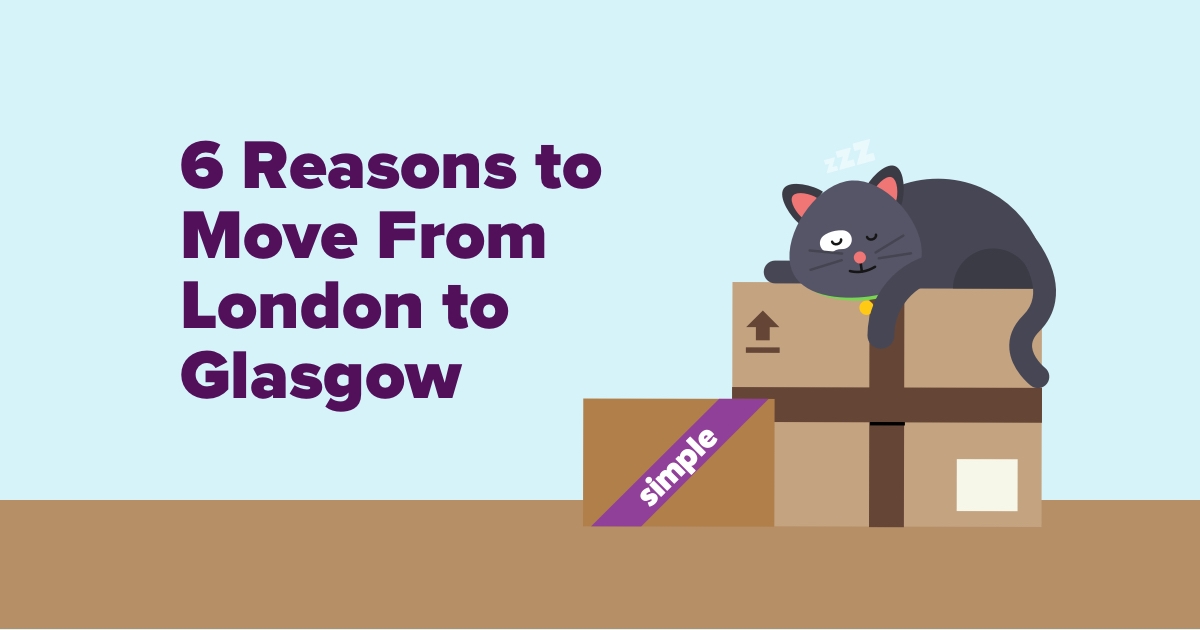 With London’s costs constantly on the rise, many are deciding to leave England’s capital to find their perfect home in an alternative British city. One of the many options available is the great city of Glasgow. With lower living costs and an abundance of local transportation, there are many reasons why previous Londoners have decided to make the move.

Glasgow is the most populous city in Scotland and the third most populous in the UK, with an estimated city population of 621,020 in 2017. It’s a thriving city that has captured the hearts of many Brits, especially ex-Londoners. To help you find your perfect Glaswegian home, we’ve created this guide to help you research the local costs and how they compare to London life.

Compare My Move facilitates many removals to Glasgow, helping you relocate with absolute ease. If you’re currently living in London but are in need of a change, then here are just a few of the reasons you should commit to the move and relocate from London to Glasgow.

1. Homes Are More Affordable in Glasgow

It might seem obvious but it’s important to note: living in London is expensive. Despite the higher salaries, it’s the most expensive city in the UK. According to Numbeo, renting in Glasgow is 62.81% cheaper than in London, saving you so much more money in the long run. The average rent per month for a 1-bedroom apartment in London is £1,701, whilst in Glasgow it’s much more affordable at £618. A huge difference to consider.

Glasgow’s renting prices are so affordable, in fact, that they are also 20.45% cheaper than in Scotland’s capital, Edinburgh. However, it’s not just the rent that’s cheaper.

According to Zoopla, the average asking price for a 3-bedroom house in Glasgow is £182,945, whilst in London, it’s incredibly higher at £653,802. Property prices will vary depending on where in the cities you live, but overall, Glasgow is much cheaper than London when it comes to property prices.

2. Living Costs Are Lower in Glasgow

Again, it may seem obvious that Glasgow is cheaper to live in than London, but it’s important to research and see just how much it can benefit you if you make the move from London to Glasgow. According to Numbeo, to achieve the same standard of living that £4,600 would provide you with in London, you would only require £2,802 in Glasgow. Moving from London to Glasgow could save you so much in extra costs and even provide you with the same standard of living. However, don’t forget to factor in removal costs when making your decision.

As an example of some of the cheaper costs you’ll encounter when living in Glasgow, we’ve found some of the vital expenses required when living in the city. A one-way ticket for local transportation in London costs £2.50 according to Numbeo, whilst in Glasgow it costs £2.40. This may only be a slight difference but it all adds up. Especially when looking at the monthly tickets. One monthly transportation pass in London costs £150, whilst in Glasgow it’s much cheaper at £52.

Your monthly utilities bill in Glasgow will cost around £102.54, whilst in London it would be about £168.73. If you’re looking to eat out, you’ll be saving so much more in Glasgow with an inexpensive meal for one simply costing £12.

3. Earn More in London But Save More in Glasgow

London is famous for having the highest salaries in the UK, however, that hasn't stopped many London house movers from relocating to Glasgow. Despite the difference in salaries, there are still many employment opportunities in Glasgow, ranging from the ever increasing public admin, health and education sectors, to transport and communications.

4. A Variety of Excellent Scottish Schools

If you’re a young family moving from London to Glasgow, it’s important to research the range of schools on offer in the Scottish city. There are a number of high-quality primary and secondary schools in Glasgow, but it’s important to research as much as possible before securing a school place so that you find the perfect one for you and your children. Don’t forget to note down which are Independent and require fees to attend.

Below, we have provided a list of the top 5 primary and secondary Schools in Glasgow according to School Guide and our own research. Hopefully this will be a great starting point for your research, helping you find your perfect home sooner.

5. Transportation is Less Stressful in Glasgow

It’s true that no matter what city you live in, local transportation will always have it’s faults. However, compared to London, Glasgow’s local transport is much less stressful. It’s even up to 65.33 % cheaper according to Numbeo, with a monthly ticket costing £52 in Glasgow and £150 in London. A huge difference for the commuters out there!

From trains to taxis, buses to bicycles, Glasgow offers a variety of ways to travel. Glasgow even has its own underground, but one that is far less confusing than the maze that is London. There are over 400 bikes to hire across 43 locations and over 110 subway stations to choose from. You can even order a free Subway Smartcard to avoid the queues, get cheaper travel prices and top-up online.

6. The Amazing Culture and Glaswegian Community

When deciding to move to Glasgow, something you’ll constantly come across is the endless amounts of comments about the incredibly friendly locals you’ll be encountering. Everyone is incredibly welcoming and helpful, ensuring no visitors are lost or out-of-sorts. Compared to the bustling, fast-paced London lifestyle, the locals and overall community in Glasgow is a breath of fresh air! Talk to a stranger in London and you’re greeted with caution, but chat to a stranger in Glasgow and you’ve just made yourself a new friend.

There’s also so much to do and so much culture to take in. From curling to opera, football matches to art shows, there’s definitely something for everyone in Glasgow. With an array of museums to explore you can learn about a number of religions, discover the city’s history or simply stand and adore magnificent modern art. In 2009, the city was even awarded the title of ‘UNESCO Creative City of Music’ for its vibrancy and love of live music.

No matter what you enjoy, you’ll always find some form of entertainment in Glasgow and all for a fraction of the price of the activities offered in London.

So, Should You Move From London to Glasgow?

Moving cities is often a daunting task, but we hope this guide has helped you narrow down your search and see the reasons why Glasgow could be the perfect home for you. Many Londoners have already made the move to Glasgow due to the lower living costs and cheaper property prices. It’s a chance to live the vibrant city life but on a much more manageable budget.

The decision is ultimately yours, but we hope this guide has successfully shown you what Glasgow has to offer and how much the move could save you. With affordable entertainment and a variety of high-quality schools, it’s a city that caters to all, easily becoming the perfect home for you and your family.

Moving to Glasgow with Compare My Move

Now that you’re aware of the many opportunities awaiting you in Glasgow, it’s time to commit to the move! Don’t waste anymore time. Simply fill out Compare My Move’s quick and easy form and you’ll be connected with up to 6 experienced removal companies in your local area. Be sure to find the best deal available and get ready to add to our list, finding your own reasons to fall in love with Glasgow.