Moving to Cardiff From London 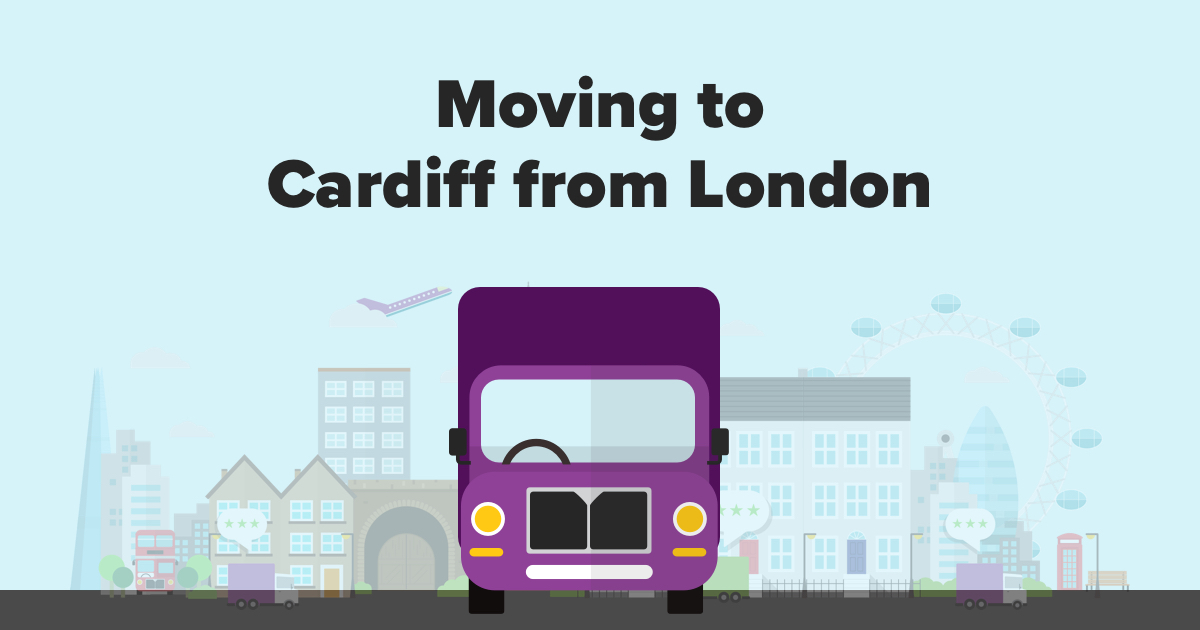 Cardiff, the capital of Wales and its largest city, is rapidly growing in popularity and was even ranked by a 2016 European Union survey as the third best capital in Europe. No wonder many have started making the decision to move to Cardiff from London and explore what it has to offer.

Famous for its culture, love of music and, of course, rugby, Cardiff is continually thriving and capturing the hearts of many new citizens. It’s a vibrant city where property prices are below the national average and the cost of living is cheaper than England’s capital. Living in Cardiff offers diversity, the beautiful Bay and a passion for the arts that never dies. From sport lovers to theatre admirers, there is so much to do and at a much lower price!

Before searching for the best Cardiff removal company, we’ve compiled a helpful list of comparisons between living in Cardiff and London. Moving cities can be stressful, but with enough research and a reliable removals team, it can be extremely exciting! So don’t be afraid to dive right in with this list of things to consider before moving to Cardiff from London.

1. Homes are Cheaper in Cardiff Compared to London

As with any city, property prices vary as certain areas of Cardiff are more expensive than others. However, according to Zoopla, the average asking price for a 3-bedroom house in Cardiff is £254,330, whilst in London, it’s much higher at £634,681. The average asking rent for a 1-bedroom flat in Cardiff is £597 pcm, a fairly affordable rent for one person. In London, it’s double the price averaging at £1,789 pcm. Both cities’ prices vary depending on the size and location of the property.

However, properties are not only cheaper in Cardiff but also cheaper per square metre, meaning that you can purchase a larger property whilst staying within your budget. According to the Office for National Statistics, the average property price in Cardiff is £2,161 per m², whilst in London, it’s £17,371 per m². Moving to Cardiff from London means that your money will stretch further, allowing you to obtain a bigger property and more space.

2. Living Costs are Less in Cardiff

Most people are aware that Wales is often cheaper than England, so it shouldn’t be too surprising to know that Cardiff has lower living costs. According to Numbeo, to maintain the same standard of living that you can have in London with £4,700, you would only need £2,800 in Cardiff, assuming you’re renting in both cities. Committing to the move to Cardiff from London could help increase your savings whilst also obtaining a larger property that’s still within your budget.

London is famous for its rather expensive lifestyle so it’s not surprising that Cardiff has cheaper living costs. Numbeo states that whilst an inexpensive meal out for one in London costs around £15, in Cardiff, it would only cost you £10. A one-way ticket for local transportation in London costs around £2.50, but in Cardiff it costs £1.90 providing you with more money to explore the areas you’re travelling to, as well as the city itself.

3. Council Tax in Cardiff and London

Due to the recent rise in Wales’ council tax, residents in Cardiff have seen a 5% increase. Council tax funds a variety of local services, helping to provide rubbish collections, fund schools and local police forces as well as other vital necessities. The amount paid is often determined by the band the property falls under; for example, bands in Wales are based on how much the property was valued at in April 2003 whilst for council tax in London it’s April 1991.

London’s band D refers to properties priced between £68,001 - £88,000 in April 1991, so for a fair comparison, the next band matches Cardiff’s band D values. It’s difficult to achieve an overall average for London as it’s such a large city. South West London’s council tax is £1,826.16, higher than Wales’ national average and South East is £1,799.64. One of the cheapest areas of London for council tax is the City of London.

The average band E property (valued at £88,001 - £120,000) in the City of London has a council tax of £1,188.81 making it slightly cheaper than a property with the same average value in Cardiff. However, council tax varies greatly depending on location. There are many areas in London that are expensive but the overall average for the City of London is cheaper than Cardiff.

4. Earn More in London, Save More in Cardiff

As London is famous for having the highest salaries in the UK, it’s expected that citizens are paid lower in Cardiff. However, expendable income should also be a factor in comparison. Home to the BBC studios, it’s no surprise that the TV and Film industry is one of the largest in Cardiff, alongside the Financial and Tourist sectors providing locals with a variety of opportunities.

As we’ve previously established, Zoopla places the average rent for a 1-bedroom flat in Cardiff at £597 pcm and in London, its £1,789 pcm. This means that the expendable income in Cardiff can be calculated at £1,613 for remaining bills and spending, whilst in London, it works out as £1,467. This means that despite London having higher salaries, you would have higher expendable income in Cardiff. By moving from London to Cardiff, you’re providing yourself with a better opportunity to save money in the long-run.

5. The Great Schools Cardiff has to Offer

As more families are making the move to Cardiff from London, it’s important to consider the best schools in Cardiff  to decide whether they’re best suited for you and your children. To aid your decision, we’ve created a quick list of the Top 5 Best Primary and Secondary Schools in Cardiff (according to School Guide and Estyn Reports) to browse before securing a school place.

There are 4 universities located around Cardiff, with many more that are easily accessible. One of the options available is Cardiff University which is the third oldest university institution in Wales. It’s one of the highest ranking in Wales and offers a variety of subjects in its 3 main colleges.

Cardiff is a multicultural and animated city, perfect for students who wish to explore the amazing nightlife or simply revise in a peaceful, scenic area. With a free-to-enter museum and unique, vintage stores, there’s a lot to see when work isn’t piled up.

London has a larger number of accessible universities, but the 4 within Cardiff are well-respected and others outside the city offer more courses to choose from too. As the cost of living in Cardiff is cheaper, students don’t have to be as concerned about accommodation and daily spending as they would in London.

Accommodation costs vary greatly depending on the location and the type of housing you choose. Cathays is well-known for its large number of student accommodation and is a 15-minute walk to Cardiff city centre. According to Which, the average weekly rent for students living in London is £255, whilst the weekly rent in Cardiff University is £124.26, including basic bills.

7. Getting Around Cardiff is a Lot Less Stressful

According to Expatistan, Cardiff’s local transportation is 48% cheaper than London’s. An average monthly ticket in Cardiff is £54 but in London, it’s more expensive costing £138 making travelling and commuting more affordable in Cardiff.

There are 2 main train stations in Cardiff City Centre, however, across Cardiff as a whole, there are 20 to choose from making outer areas easily accessible. For those wishing to commute, it must be noted that it can take over 2 hours to travel from Cardiff to London by train.

Cycling is also a popular form of transportation in Cardiff, with a number of public bikes available for hire. The M4 is easily accessed by car with Bristol just an hour away and Cardiff Airport is perfect for those wishing to travel even further. As a smaller city, the traffic is less stressful, allowing for a better journey.

Cardiff is a vibrant city that’s home to a world-class rugby team, breath-taking theatre productions and amazing local music venues catering to all tastes. The Made in Roath festival encourages creativity, whilst food-lovers will enjoy the annual Food Festival blending incredible flavours. The local museum is free to enter and the city centre is home to a variety of modern stores. From vintage record shops to well-known brands, there’s so much to explore in Cardiff and at a cheaper price compared to London.

Photography lovers will want to visit Ffotogallery’s venues to see artists from all over the world, whilst film-buffs will love to experience a variety of genres in The Chapter Arts Centre. Wales is often considered as the home to music and poetry in the UK, with the Welsh National Opera and Wales Millennium Centre acquiring incredibly talented artists.

You may think that London would have a better nightlife compared to Cardiff. However, the Welsh capital has a lot more to offer than you think! Quirky local pubs provide amazing live music for all audiences. From classy cocktail bars to 90s-music only clubs, there’s something for everyone!

Should You Move to Cardiff?

With all the information to compare, moving cities can be daunting. But many Londoners are choosing to move to Cardiff due to cheaper living costs and property prices. It’s the chance to live in a smaller, less-populated and more affordable city. The council tax in Cardiff may be slightly higher, but depending on your average monthly salary, the higher expendable income covers this nicely. You’ll also be saving by purchasing larger properties that your budget wouldn’t allow for in London.

Moving to Cardiff from London could provide you with slightly more money to either save or use on the amazing opportunities the city provides. With affordable entertainment and a variety of high-quality schools, Cardiff caters to all tenants, easily becoming the perfect home.

Saving Money on Your Cardiff Move

Once you’ve realised that Cardiff is perfect for you, you can use Compare My Move to get connected with up to 6 reliable removal companies to help you along your journey. Just fill out our quick and easy form to save yourself up to 70% on removal costs!