How to Move to Spain from the UK 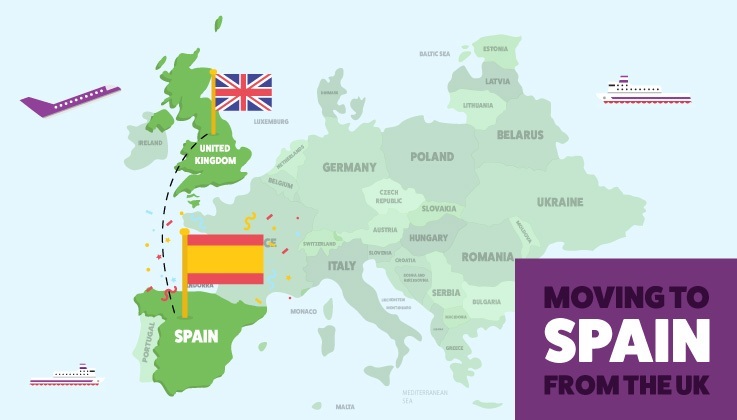 Moving to Spain is the dream for many British citizens, leaving (the majority) of the bad weather behind and soaking up the sun whilst sipping sangrias and eating paella. Ok, moving abroad might not all be a fiesta, but it is certainly a goal for some.

Well ahead of booking your international removals to Spain, you'll need to start planning. Luckily, Compare My Move is here to explain everything you need to know about moving to Spain from the UK.

We will cover where to live and where to work, which health services are available in the country as well as how to get around once you are there including how to drive in the country. Finally, we take a look at moving to Spain once Brexit has happened and the UK has left the EU.

Where to live in Spain

According to the Instituto Nacional de Estadistica, 296,600 British citizens were registered as living in Spain in 2016. With this sort of popularity, it is not surprising that some areas of the country are hotbeds for expats, although equally you are likely to find Brits in most corners of the country.

It is no shock to discover that the most popular spot for British expats in Spain are on the southern coast, where the weather is warmest throughout the year.

These areas include the Valencia region and more specially the city of Alicante which is a stunning coastal city that is famed for wonderful palm tree flanked boulevards and shopping streets. The region of Andalucía and specifically the city of Málaga is also very popular with the British as a destination for their new home and is an upbeat area that is famous for its nightlife and bustling bars. Finally, the Spanish Balearic Island of Mallorca is a hub for Brits moving to the country, this area both has the bustling and cultural city of Palma and the party centre of Magaluf.

Where to work in Spain

The working British population of Spain according to a 2011 census is only 22%, with the majority having retired to the country or unemployed individuals such as students. However, if you plan on moving to the country and aren’t retiring you will need to work out how you are going to pay the bills and will likely need to get a job.

There are a number of key areas that stand out as the most popular sectors for work within the country for expats. The biggest of which is education, which is likely due to the skills gained by being a native English speaker, allowing most to proficiently teach it as a foreign language. This may also be due to the general status of the British education system which is valued across the globe. The second biggest sector for Brits to work for in Spain is accommodation and food services, this is likely due to the huge tourism industry in the country paired with the fact that English is widely spoken as a second language, making native English speakers valuable in this sector. Other popular sectors that appeal to the skills and careers of British movers are wholesale and retail as well as the repair of motorcycles and motor vehicles.

However, if you do not qualify for this type of healthcare based on your situation then you will need to seek an alternative solution. This is likely to include the taking out of a private healthcare plan, or you may choose to pay all your medical bills in full. You may also opt for private healthcare if you want get a significantly quicker service than on the state-run plan.

Spain has a fantastic network of public transport, which is especially true in the major cities across the country. Both Madrid and Barcelona have extensive metro systems, whilst other cities benefit from efficient and reliable buses, trains and trams.

Prices vary widely between times, the location you are in and the location you are travelling to. However, to give an indicator you may expect to pay between €2 - €4 for a single ticket on the bus and €11 - €13 for a 10-trip metro ticket. In cities with metros it is fairly quick to get about, although where only buses are available then travel around major cities can be slow during rush hour.

Driving in Spain is a good option if you plan to move to more remote areas. However, if you are based in one of the major cities the public transport links are so good that driving is usually unneeded.

If you plan on moving your own vehicle to Spain you will need to get special permission and may need to pay taxes if you plan on keeping it there for longer than six months. When driving you will need to carry your full valid driving licence, proof of insurance that covers you in Spain and proof of ID such as your passport. You are also required by law to carry a reflective jacket, warning triangle, headlamp beam deflectors and GB sticker of Euro plates.

Moving to Spain after Brexit

There is currently little known about what Brexit will mean for British expats in Spain. However, in a statement by foreign minister Alfonso Dastis made in October 2017, it was highlighted that Brits will still be welcome in the country even if no deal is reached. What this means practically in terms of access to healthcare and other benefits as well as permission to work in the country will only come apparent in time.

Compare My Move in Spain

We hope this guide has left you fully informed ahead of your move to Spain from the UK. From where to work to what will happen after Brexit, there are a range of factors to consider. When you're ready, remember to use Compare My Move to find professional international removal companies based in your area that'll take you abroad with ease.

Just fill in a quick and simple form and get connected with up to 6 international removal companies, and save up to 70% on your moving costs in the process.