Retiring to France from the UK 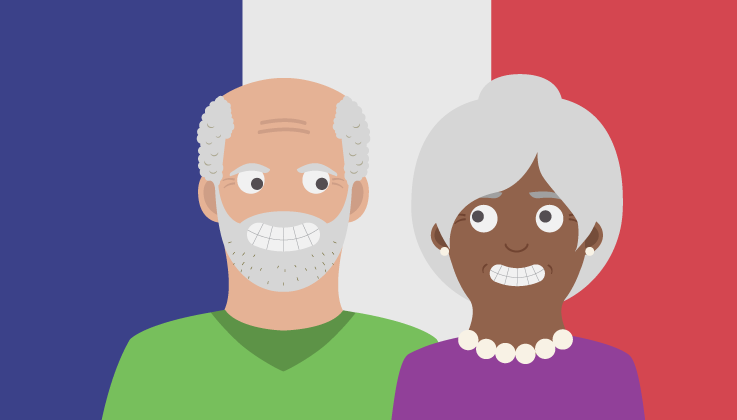 For many Brits, retiring to France is the dream of a lifetime. Benefiting from warmer weather, a more relaxed way of life and generally exploring a new and exciting country creates a massive pull for those that have finished their career and looking for the next chapter in their life. This is no new thing, with movement from the UK to live with our French neighbours having a history of popularity spanning back centuries.

In fact recent statistics have shown that a large percentage of British living in France are of the retirement age; with 148, 800 expats living in France in 2016 a total of 44% of this are aged 55 and over.

However, upping roots and shipping over to France once you have retired is a big decision and not one that should be taken lightly. During this consideration process there are likely a number of questions that you will want to ask yourself. So before you use Compare My Move to arrange your removals to France, we'll explore how to retire to France from the UK, making your decision and the process simple.

When deciding to retire to France you may already have an idea of exactly where you want to be located. Perhaps you have visited an area on holiday, fallen in love and decided that you would move there once you retired. However, perhaps you are taken by the country as a whole and want to move, but not 100% sure which area is best suited for your needs. Below we give some of the best areas for expat retirees as well giving some considerations of the upfront costs of moving to them.

Paris is the natural starting point as the capital city of the country. With its historically rich culture and stunning architecture it is no surprise that this area is a go-to for those retiring from the UK. However, Paris is certainly not going to offer you the best return for your retirement money as it is easily the most expensive place to live in the country. Rental prices in the city can start from around £850 a month for a modest one bed and go up from there. Purchasing also comes at a hefty price with the average square metre costing around £8,000.

With the extortionate prices of living in Paris, many expats quickly ask the question ‘where to retire in France cheaply?’. An arguably cheaper alternative to Paris is that of Bordeaux. This town of around 240,000 people is stunning and is actually registered as a UNESCO World Heritage site meaning many parts are protected by global protection laws. Housing prices are cheaper than the capital, with an average apartment in the city centre starting at around £130,000. The Bordeaux area is famed for its incredible wine and food and is certain to make for a comfortable and more affordable retirement.

For those wanting a more rural or small-town retirement as well having the desire to escape the massive prices involved with living in Paris they should consider Languedoc-Roussillon. This region is growing in popularity with expats and for good reason. The area offers the normal range of excellent French food and wine as well as many cultural activities and outdoor pursuits, made possible by the warm Mediterranean climate.  Housing is cheaper still than Bordeaux with apartments starting from around £100,000 and larger houses costing upwards of £200,000.

Planning Your Retirement to France

Moving abroad to retire can seem a little overwhelming in terms of what you need to organise. Yet by understanding where to  start with your planning you can take the first steps to your dream retirement. For a comprehensive breakdown of other issues to consider, check out our guide to moving to France from the UK.

Finding a Place to Live in France

Your first step should be findings a place to live. You can use the information we have provided above on the most popular destinations in France for expats to retire to, or if you have a better idea of where you want to live then you can explore them.

Firstly, think about the language barrier, if you plan on not learning French then you will want to identify an area with a large number of expats and where it is possible to conduct simple things like shopping and admin in English. Secondly, if you plan on visiting family or having them visit you, accessibility to an airport is important as it will make your life much easier as well as limiting travel costs.

Another step you should consider is how you will pay for things. You may achieve this by simply keeping your bank account in the UK and ensure that you can use it abroad. If you do this, then you will want to check any fees you may incur as well as being aware that you will be applying whichever exchange rate is going at the time. In most cases you may need or want to set up an account in the country which is also possible and fairly easy as we are members of the EU.

Converting the money you have saved for retirement or any other lump sums you have available depends on the exchange rate you can get at the time. There are many options when it comes to money transfers, many of which are fee free although these tend to have poorer overall exchange rates. If you decided to move and the exchange rate is particularly poor at the time, you may choose to just exchange the amount you need to live and leave the rest in a UK holding until rates improve.

Healthcare in France for Over 60’s

Healthcare in France is renowned for its excellent level of service and world leading treatments. But as a non-French resident in the country accessibility to this healthcare may be a concern for expat retirees. Knowing what you are entitled to and what you may need extra cover to help with will help you a lot in understanding how to act in the unfortunate event that you need to use it.

Luckily for us Brits accessing healthcare in the country has recently become a lot easier. This is due to a new universal system instituted by the French government in January 2017 called Protection Universelle Maladie (PUMA). This new system grants instant and continuous access to healthcare for anyone who resides in France.

Practically this means that if you have lived in France legally for 3 consecutive months and are a permanent legal resident (meaning you reside in France for at least 183 days annually) then you are able to access the healthcare system for free.

Taking this into consideration there are two situations in which you will likely want to take out additional healthcare insurance. In the first case, during the first three months of residency you will not qualify and therefore will likely want the security of healthcare cover. The second reason may be if you are in poor health already and wish to secure a higher level or quicker access to healthcare within the country.

Cost of Retiring in France

The cost of living in France is on average 5% higher than living in the UK. However, this is widely dependent on where in the country you live. The cost of renting or buying also vary widely on the type of property and where is it located – we have given some details on this earlier in this article.

In terms of living expenses, petrol is generally much cheaper than in the UK. Alcohol, both in bars and in supermarkets is also much cheaper due to a much lower tax percentage added by the government. Some items are notably more expensive, for example food is generally more pricey across the board. If you plan on undertaking DIY on your property it is worth noting that supplies such as tools and building materials are much more expensive than in the UK, in fact many expats will buy supplies in the UK and carry them over in a van to save money on these expensive items.

Car and House Prices in France

Buying a car can also be very expensive in France, with most being comparatively twice the price as their similar versions in the UK. For this reason it may be worth taking your car with you when you move. However, these are only allowed in the country for six months before they either need to be re-registered or returned back. This comes at an extra cost, but will often be overridden by the savings made.

The cost of running a house is on a reasonably close level to the UK, with gas and electricity costing on average £1,500 a year.

Claiming your UK pension from France

Claiming your UK pension from France is relatively straight forward. This is due to the fact that the UK are still in the EU so there little or no restriction to doing this. The only decision you may need to make is whether to have your pension paid into your UK or French bank account. Most expats will choose the former as it allows them to choose when to exchange based on favourable exchange rates.

As a retiree you will likely still be interested in and impacted by the government in the UK. For this reason, in the circumstance that you are a British citizen and have been registered to vote in the UK in the past 15 years you will be able to vote for 15 years after you move. You will need to register to vote every year.

Retiring to France After Brexit

Little is known about what will happen to retirees planning to or currently living in France after Britain leaves the European Union. Although many of the smaller details will depend widely on the deal that is struck between the British government and EU. It is fairly likely that a good deal will struck as the French will want to continue trading with Britain, as well as ensuring their people can travel easily around.

The two issues that are clearly troubling retirees in the country are whether they will still benefit from good taxation rules and will be able to access healthcare.

Pros and Cons of Retiring to France

Moving to France has a lot of pros and cons, many of which we have discussed in depth in this article. Below we give some quick pointers on the best reasons why you should make the move and some reasons that you may want to take into consideration before committing.

Compare My Move in France

We hope this article will help you on your journey to retiring in France, and start the ball rolling to a new life abroad. From costs to healthcare, there are many factors to plan and prepare for. But when it comes to moving your possessions from the UK to France, remember to use Compare My Move to save time and money on your removal costs.

Just fill in a quick and easy form, and we'll connect you with up to 6 local removal companies to take you to your destination in France. Our network of removal companies are all fully insured and verified as standard, and are reviewed by fellow movers for your peace of mind.