Werewolves are on top, with ‘Blood and Chocolate’ resulting in a spine-chilling 256 deaths

As all horror fans know, moving house is a common cliché - whether it’s finding a dream home, moving abroad or welcoming a creepy new neighbour, the outcome always remains the same: an innocent family is picked off one by one wondering why “haunted” wasn’t on the listing. But which home move had the deadliest consequences? Compare My Move has analysed 100 iconic horror movie house moves to find out.

Use the filters included to explore which directors, studios and decades produced the deadliest home moves

Audience and Critic ratings taken from Rotten Tomatoes. The full dataset can be found here

The Devil’s in the Detail

Exploring the data listed in the table above, we’ve uncovered some key findings that traverse the use of home moves in the 100 horror films researched

With 2.6 deaths per minute, ‘Blood and Chocolate’ contains the deadliest home move to date, exceeding even the most iconic of villains, Dracula!

Born a werewolf, Vivian had to flee her home in Romania, only to return years later when her family is hunted down and killed. Unfortunately for Vivian, both home moves result in deadly consequences, ensuring the film takes our number one position as The Deadliest Home Move - with 256 on-screen deaths.

This fairly unknown fantasy-horror beats some of the most iconic movies like ‘Bram Stoker’s Dracula’ and ‘Interview with the Vampire’. However, unlike these famous horror idols, ‘Blood and Chocolate’ only has an age rating of 12, making it the most deadly yet family-friendly movie on the list.

The noughties are crowned the Deadliest Decade with 352 on-screen deaths in only 23 films. That’s an astonishing 15.3 deaths per film!

As the years go on, we can clearly see in our list an increase in deaths per film with the grand total being 1,015 - perhaps we as an audience aren’t as happy unless there’s a clear threat and consequence?

However, it’s interesting to see that despite there only being 3 films released in the 90s, the number of deaths drastically rises to 204, calculating at 68 deaths per film. The noughties may have the highest amount but in only 23 films. Perhaps the 90s aren’t as innocent as we first thought?

Iconic, modern movies like the ‘Paranormal Activity’ series, don’t actually contain many violent or gruesome scenes, allowing us to insinuate that perhaps horror fans are evolving - turning towards the subtle but hard-hitting scenes of terror like ominous floating objects rather than outright blood and gore.

Modern horror encourages us to imagine far worse. It’ll be interesting to see how long this trend continues for.

In 26 films, the remakes came out on top with 99 totalled on-screen deaths compared to 59 in the originals.

When comparing our list of deadliest home moves, it’s intriguing to see how many paired films are included. With classics like ‘Pet Sematary’ and ‘Fright Night’ being revisited, it makes sense to compare both versions of the film. ‘Fright Night 2001’ almost triples the death count from 5 to 13, whilst the modern ‘Pet Sematary' sticks to the original storyline, keeping to 7 on-screen deaths.

Another obvious increase is ‘Child’s Play’ featuring the iconic and rather terrifying tale of Chucky, a possessed doll hell-bent on seeking revenge. Whilst the original film from 1988 only contained 6 deaths, the 2019 remake doubled the body count, increasing it to 12 unfortunate souls.

Despite your opinion on remakes, there’s an obvious increase in body count supporting the idea that there was once an increasing craving for more drastic scares. So, what have we learnt from this? - Don’t buy your child a vintage doll as a moving day gift, it’s just not worth it! 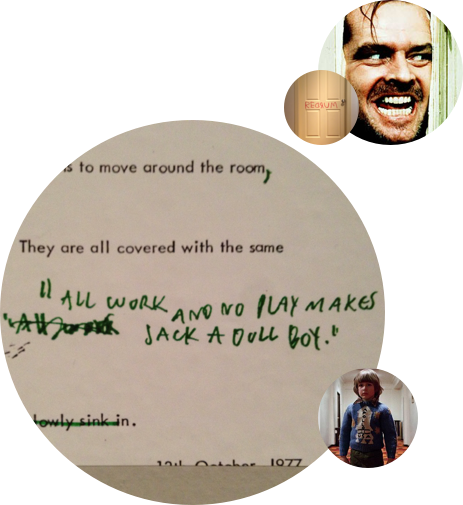 Arguably the Most Famous Film on the List, The Shining Has Been Crowned the Fan Favourite

A staple of this particular horror cliché, ‘The Shining’ was awarded the highest audience score of 93%. ‘Vampyr’, however, is voted as the critic’s favourite with a rare score of 100%.

The critics vs the audience - an age-old battle that many films have had to succumb to. But what do they think when it comes to the common horror trope of moving house?

From our list of 100 films, 15 were rated between 90-100% by the critics, whilst only 2 were given scores of this range by the audience. Perhaps they’ve already given up on this tired trend? The audience favourite was awarded 93% - ‘The Shining’ provides a well-needed revamp on the typical ‘haunted house’ genre. With only 2 on-screen deaths, this classic film fully satisfies our thirst for horror, giving us a subtle sense of dread until the penultimate climax of Jack’s death.

Although audience and critics disagree on these particular films, they may agree on this use of rising dread rather than outright gore - ‘Vampyr’ is awarded high praise with 100% from critics and 83% from the audience. This black and white twist on the tale of Dracula also uses subtle horror techniques, limiting the body count to only 3.

Perhaps this means you’ll fare better during an international move? With the dark gradient and colours, it removes the use of blood as a form of fear, giving it a PG rating. The slow build-up and unsettling imagery are what keep this film a success, satisfying both the critic’s and the audience's lust for terror.

Who Knew Moving House Could Be So Terrifying?

The ‘moving house’ plot is a common spectacle in the horror universe. The idea that a series of horrifying events could lead from a simple house move is often revisited, creating a number of popular horror icons.

From ‘Poltergeist’ to ‘The Conjuring’, many successful films have twisted the stress of moving house into something sinister. But how deadly is it? From the 1960’s-80’s, the milestone of moving racks up 185 deaths which only increases with time, reaching an astonishing 830. But what better way to unnerve an audience than to play with mundane, everyday tasks?

These films explore the uncanny, twisting the stress of moving with the most unlikely of threats. With 2019’s ‘Us’ and ‘Child’s Play’ revisiting the trope once again, it’s fair to say that this popular cliché may never die. So, be careful at your next house viewing, you never know what could be lurking inside...