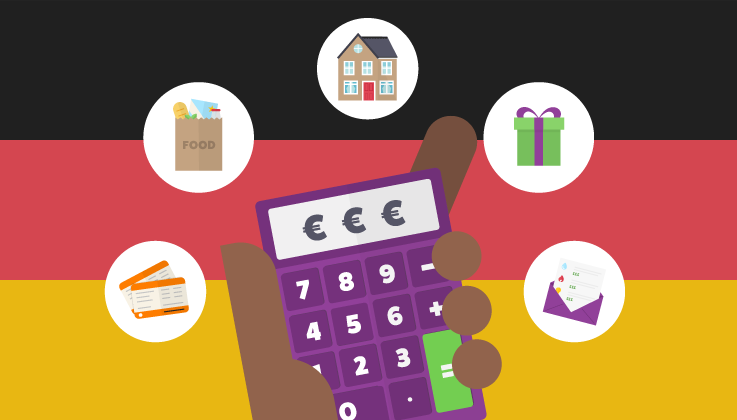 Cost of Living in Germany

For those that dream of packing up their belongings and moving to Europe, Germany is often an attractive option. It’s not only their fun loving spirit and love for hearty food and good beer that draws Brits to live in the country, but also the fantastic quality of life and fairly cheaper prices.

But before you book your removals to Germany and join the estimated 100,000+ British expats in Germany, you'll need to plan your move and research thoroughly. A great place to start is by considering the financial logistics of your new life abroad.

In this guide, we explore the average costs of living in Germany and your potential earnings once you’ve secured a job there. We have everything you need to know about whether or not Germany is the place for you.

How Much Does it Cost to Live in Germany?

As with any country, there are wide discrepancies in costs between living in popular cities and the cheaper alternatives. In the rest of this article we will seek to provide more details on these discrepancies and help you understand the real potential cost of making the move overseas and living in Germany.

Cost of Living in Germany vs the UK

When you look at the costs of living in Germany compared to the United Kingdom, there’s not a huge difference overall. However, when looking at the more granular detail, some cost differences are rather huge.

This becomes particularly apparent when it comes to living in the capital cities of each country, with London being much more expensive compared to Berlin. In fact, the average rent for Berlin is estimated to be a massive 51.46% cheaper than in the capital of England. The average price of groceries in Berlin is also lower, estimated at 5.63% cheaper compared to London.

Cost of Living In Berlin is Cheaper than London

Compare My Move have studied figures released by statistics website Numbeo and have discovered that overall living costs in Germany are actually 4.03% higher than they are in the UK (not including rent). Although there are a number of stats that bring the cost of living in Germany closer to those in the UK, such as the average cost of rent which is actually 3.78% lower in Germany.

However, when you compare the cost of living between the two Capitals, it’s obvious that Berlin is a much cheaper city compared to London. Berlin is actually cheaper than London in every aspect, including 34.90% cheaper in restaurant prices, 15.70% cheaper in consumer prices and a massive 51.46% cheaper in rent. This is rather essential information if you’re considering moving to Germany from the UK, especially from London.

Living expenses such as healthcare and monthly bills also differ between the two countries. For example, healthcare in the UK is free under the NHS and is paid for by the taxpayer. In Germany, they have a state run healthcare scheme but it’s run in a different way, with each employed person paying up to 14.6% of their total salary to opt-in to the healthcare scheme.

However, you can opt out of the scheme and use private health insurance separately. When it comes to monthly bills, including electricity, heating, cooling, water and garbage, figures show that, on average, these cost around 37% more in Germany than in the UK.

In terms of the taxes you’ll pay when living in Germany, these vary widely on how much you earn. In 2019, the tax free allowance is €9,168 which is significantly less than the £11,850 allowed in the UK. However, the basic tax rate starting after these points is as low as 14% in Germany and much larger at 20% in the UK.

The Cost of Everyday Living in Germany

Working out the cost of everyday living will give you a much better idea as to whether or not moving to Germany is an affordable option for you. To do this, you must understand three main costs associated with living in the country: the cost of renting or purchasing a property, the cost of bills and utilities and the cost of paying for everyday items.

The exact cost of these everyday purchases varies widely depending on where you live and also at which stores you purchase them. Costs in major cities are likely to be higher than in rural locations or smaller towns. Below we highlight the average cost of some of the most popular items you may purchase and the average cost you may expect to pay for them according to Numbeo data.

The amount you will spend will vary widely on your lifestyle and the amount you consume, as well as how many others depend on you to provide for them. However, as a general rule, you would want to budget around €200-€250 per month per person for everyday items and occasional dining out.

Cost of Renting or Buying a House in Germany

Renting or purchasing a property will also impact how much you spend on a monthly basis. Understanding how this can vary between the locations you may live in will likely impact on where you choose to move to. To help you with your research, we have highlighted some popular cities below and the associated average costs:

We have included Leipsig in the comparison chart as it’s considered to be the cheapest place to live in Germany. With rent and purchase prices being less than half the price of more expensive alternatives such as Munich, it’s clear that there is quite a gap in potential costs across the country.

Interestingly, the cost of living in Berlin is not the most expensive in terms of renting or purchasing a property, with other cities including Munich, Hamburg and Frankfurt all being more expensive in these aspects.

In fact, in comparison, Munich’s average renting price is estimated to be 32.89% less than in London, whereas Berlin is even cheaper at an estimated 51.18% less in total. Check out our guide on where to live in Germany for further information on the best areas to settle down in.

Cost of Utilities in Germany

Knowing how much you may have to pay in terms of utilities like electric, heating, cooling, water and rubbish collection will also help you understand the affordability of a move. In the table below, we have provided a few examples of how much you may expect to pay for these on a monthly average according to Numbeo:

Germany may very well have lower renting prices compared to London, but if your earning potential is not comparable, then this cheaper level of living can mean very little to those looking to better their quality of life.

With this in mind, in Germany as a whole, salaries are 12.25% higher than those in the UK according to Numbeo, covering the slightly higher living costs. This is a good step up when you compare it to the incredibly lower renting costs as well.

The Best Paid Jobs in Germany

If you decide you need a career change or that you want to earn a bit more money when moving, then you may want to consider a few of the following options. Unsurprisingly, there are a number of careers that are well paid both in the UK and in Germany. These include roles like an investment banker, who could be earning up to €150,000 in their first year and upwards of €300,000 when in a senior position.

How Much Money Do You Need to Move to Germany?

Before you move to Germany, you’ll want to research how much it could cost you to physically move countries. Most of this money will be needed up front and therefore should be saved ahead of the moving date. These aspects can include anything from the physical cost of flying yourself and your family out to the country and also the cost of having your belongings moved.

It will cost you, on average, around £1,500 to £2,000 for your house removals costs by road. The cost of moving your belonging depends widely on how much you want to take with you and by which method you choose to do so. Sending your items by air freight is a much more expensive option, though it is faster than road freight. You can check out our guide to international removals costs for more details and considerations.

The cost of flying out may be relatively cheap if you plan the flight ahead of time. For example, you may be able to get budget flights from London to Berlin for around £35 if they are booked a month or more in advance.

In terms of getting visas and other costs associated with getting work and living in the country, whilst we’re still part of the EU, you will not need any visas to work in the country. However, other paperwork is required in terms of securing yourself residency. Keep in mind that these may have small admin fees attached.

You’ll also need to assess any loss of funds as a result of any gaps in work. For example, even if you have secured a new job in Germany before moving, you may need to take a week or more of unpaid leave to move and settle into your new home. This could be even longer if you haven’t managed to secure a job, so it’s a good idea to save before the move to cover extra expenses during these times.

Why Hiring an International Removals Company Will Help

To help with your international move, it’s highly recommended to hire a reliable international removals company to help handle and safely transport your items to your new home. Moving to another country is highly chaotic and stressful anyway, so take some of the weight off of your shoulders and find an efficient and experienced removals team to help make the move as hassle-free and organised as possible.

As well as being able to professionally pack your belongings, a qualified removals firm can also help you find a secure storage facility to protect your items until you’re settled in and ready to have them delivered to your new home in Germany. Find the right team of movers for you and don’t forget to compare companies to help make the process as smooth as possible whilst also cutting down your removal costs.

Compare My Move in Germany

We hope this guide has helped you understand the range of costs associated with living and moving to Germany. With higher average wages and lower renting costs than in the UK, moving to Germany is an attractive prospect, even with the slightly higher living costs.

When the time comes and you're ready to book your international removals, remember to use Compare My Move to save both time and money when it matters most. We'll connect you with up to 6 professional removal companies to take you door to door to your new life in Germany. Just one quick form and you could save up to 70% on your removal costs today.

Compare & Save up to 70% off International Removal Costs