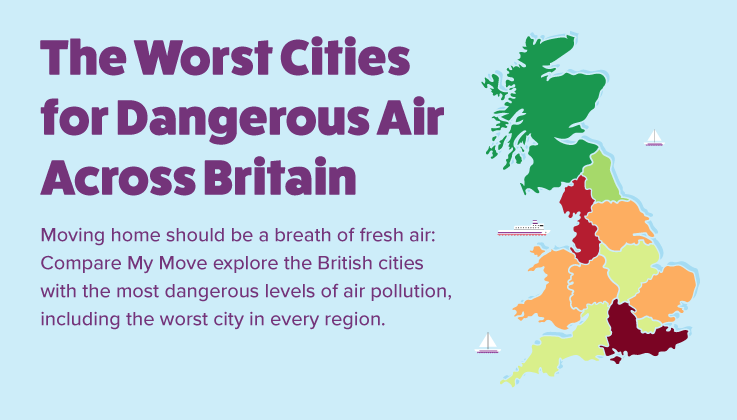 Although Clean Air Day 2019 is bringing the effects of air pollution to the forefront of many people's minds, the quality of the air you breath at a new house may not usually be a major consideration for many house movers. With all the planning and arranging that goes into a house move, air pollution around your new property will not be the top of your priority list.

So to keep you fully informed, the UK's best leading provider of removal quotes Compare My Move explore some of the worst cities and towns across Britain for dangerous levels of air pollution, areas where pollution poses serious health risks. If you're looking to move to these towns and cities, air quality surrounding your new property is a vital consideration.

There were 42 British towns and cities highlighted by the World Health Organisation (WHO) this year for breaking WHO limits on ambient air pollution. These are towns and cities which suffer from high pollution levels across the year, meaning a higher likelihood of respiratory health risks for residents.

The 42 areas were highlighted for drawing with or exceeding the WHO limit of 10µg/m3 of PM2.5, a level above which poses a significant health risk.

PM2.5 is measured in micro-grams per cube metre of air.

Find below a breakdown of the 42 areas across the different regions of Britain.

Warrington tops the WHO report for the worst air in the UK. With concentrations of PM2.5 hitting 14 µg/m3, the Cheshire town tops the North West and the UK for worst annual PM2.5 pollution levels. This is above the WHO recommended limits of 10 µg/m3, and is well above the UK annual average of 9.6 µg/m3. This will be directly linked to high amounts of traffic within the town centre at peak times across the year.

Next up with annual concentrations of 13 µg/m3 are Bristol, Stansford-Le-Hope, Storrington and Swansea. It's worth noting that all of these cities have higher concentration of PM2.5 pollutants than even London (12µg/m3), a city infamous for its history of smog. Major road networks and busy city centres will be to blame for the high pollution levels, but it's clear that air quality should be a factor to consider if you're looking to move to these towns and cities.

The top tip is to explore air quality forecasts in the vicinity of your new home, and consider not only the noise of living near a major road but the air condition too. It's worth noting that councils within these areas are aware of the pollution issue, and there will be an effort to lower these pollution levels. For example Bristol City Council is exploring introducing a clean air zone in the centre of the city.

The Cleanest Area in the UK

Out of the 42 towns and cities across Britain breaking the WHO pollution limits, there are none to be found in Scotland. If you're looking for clean air, you'll be well-suited in the home of Robert Burns. According to the data, Scotland is the cleanest region in the UK, with no towns or cities monitored by WHO breaching the 10µg/m3 limit.

In contrast, the South East of England is the worst region in terms of air pollution, with 8 of the 42 trouble towns and cities being found in the region. This is closely followed by North West England, which has 7 of the limit-breaking towns and cities. The town of Warrington tops the list in the North West, whilst Storrington tops the South East region with 13 µg/m3 of PM2.5.

Once again, the advice is to do your research and explore pollution forecasts in your region while house hunting, especially if you're looking in the North West and South East.

Find below the PM2.5 concentrations in the worst polluted city in every region of Britain.

Why Air Quality Matters During Your House Hunt

High concentrations of fine particulate matter pollutants have been called the greatest environmental risk to health by WHO. Although air quality might be an obvious consideration for those living on the side of major roads, every house owners should be aware of air quality around their house regardless of where they live. Air quality may not be on your mind when searching for your dream house, but as you’re looking for a house to call a home long-term then the health risks do mount.

The top tip is to include air quality on the same level of importance as energy efficiency when you’re house hunting. Make it an extra step when considering an area, and use tools such as UK Air found on the DEFRA website to explore pollution levels and forecasts around prospective neighbourhoods.

Compare My Move is a house removal comparison service looking to save you time and money on your move. Fill in a quick and easy form, and we'll connect you with up to 6 professional removal companies, saving you up to 70% off your house removal costs. Our network of removal partners are verified by us and reviewed by you, and come fully insured for a stress-free move.