The Cost of Living in Spain 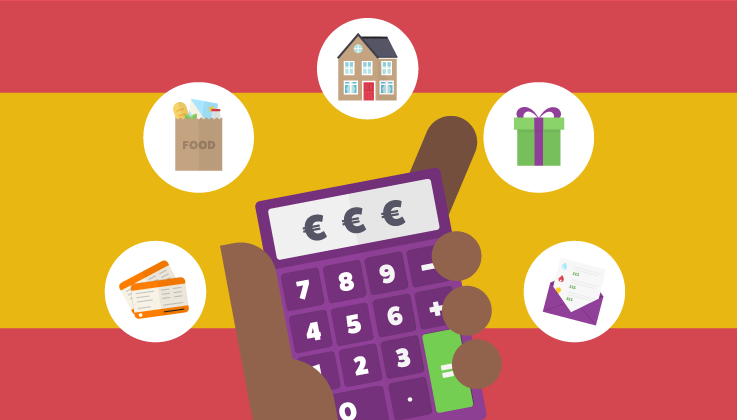 The average cost of living in Spain is €900 per month. This includes rent, utilities, food and drink for one person. If you're looking to move to Spain, you'll need to know how much every day life will cost in your new home. In this article, Compare My Move explore the every day costs of living in Spain compared to the UK, including rent, shopping, and salary. Before booking your Spain removals and enjoying long hot days and an incredible Mediterranean diet, it's worth knowing if your new life will be financially possible.

How Much Does it Cost to Live in Spain?

It will cost the average person €900 per month to live in Spain, if you include rent, utilities, food and drink for one person.

Of course this cost actually widely depends on where you live and the lifestyle you lead. For example, living in the capital city or other popular areas, renting a large home and dining out every evening will cost you more than cheaper areas and less lavish lifestyles. In the rest of this article we will go into the details of what the real cost of living in Spain might be based on your situation.

Cost of Living in Spain vs the UK

Spain has always been well known for generally having much lower living costs than the UK. According to Numbeo, the overall average cost of living in Spain is 18.2% cheaper than in the UK as a whole. One major area contributes to this fact, as rent is on average 33.19% lower in Spain than Britain.

This is part of the reason that so many Brits make the move over to Spain in order to benefit from a financially better quality of life. In fact recent figures from the Instituto Nacional de Estadistica (INE), the Spanish National Statistics Office suggest that the total number of British citizens registered as living in Spain in 2016 totalled a huge 296,600. This proves just how popular Spain is as a destination for expats.

Even when you compare major cities such as Madrid and Barcelona to similar cities in the UK such as London, lower living costs are still very apparent. For example, stats from Numbeo highlight that living in Madrid is actually 24.31% lower than London and Barcelona is a total of 21.8% lower.

In terms of healthcare in the country things work a bit differently than here in the UK. Where the British NHS is paid for by the tax payer and free to use for any British citizen or those that qualify by living in the country. In Spain, for those that work the system is similar, with contributions to the health system being taken out of your wages and therefore making using the system free. For those that do not work or for some reason do not qualify, you may need to arrange additional healthcare insurance.

Taxes in Spain are reasonably high when compared to those in the UK. For example, you are able to earn £11,500 in the UK without having to pay any tax. Whereas earners in Spain have to pay tax on all of their earnings. Practically the amount you pay depends on how much you earn. For example, you will need to pay 19% on anything up to €12,450 and then an incremental range upwards of anything from 24% to 45% of your earnings that reach beyond that.

The Cost of Everyday Living in Spain

When it comes to working out exactly how much it will cost you to live in Spain there are a number of elements that will help you understand this. These include exactly how much you might expect to spend on a daily basis on food, drink and dining out as well as how much you may have to pay on bills including water, electricity and garbage disposal. By knowing exactly how much you may expect to pay in terms of renting or buying a property you will also be able to get a much better idea of your potential monthly outgoings in the country.

The day to day costs of purchasing food from supermarkets or when you go out to eat at a restaurant are often over looked as they seem sporadic and don’t appear to add up to much. However, if you take into consideration the full amount you might spend on food throughout a month it may reach around €150+, which is no small sum. To give you an idea of how much you might expect to spend we have highlighted a few common costs from Numbeo below:

Cost of Utilities in Spain

The average monthly cost of utilities in Spain is €110, including the cost of electricity, heating, cooling, water, rubbish collection and internet. Again these might not seem like huge costs, yet when combined they can easily add a large chunk of money to your overall living costs. The cost of utilities varies widely based on the area of Spain that you choose to live in, in fact some in some cases the cheaper areas may cost half the amount of more expensive areas. We give an idea of this below:

Cost of Renting or Buying a House in Spain

The amount you will spend on accommodation such as in rent or purchasing a property is likely to be the biggest outgoing you will have in any city you decide to live in. Similar to the variations in utility costs, rental and purchase prices vary widely depending on which part of Spain you decide to live in. In this case the cheapest option is less than half the price of many of the more expensive options, below we show an example of this range across the country:

Where to Live in Spain

Study the figures above and it is clear that Alicante is one of the cheapest places to live in Spain. In comparison, the cost of living in Barcelona is more than twice the price when it comes to rent and almost that much when it comes to purchasing a property. This is similar in many ways to the costs of living in Madrid and San Sebastian where the cost of living may be seen as unreasonably high in comparison to other cities within the country.

Quality of Life and Cost

However, when you look at the wider picture and assess the quality of life in these more expensive areas you are likely to find that they are significantly higher. Also the job opportunities, especially in Madrid and Barcelona are likely to be more prolific and better paid than in areas such as Alicante and Malaga which mainly rely on tourism as their main profit makers.

You can read more about quality of life across different areas in Spain through our guide on the best places to live in Spain.

Knowing how much it will cost you to live in Spain is only part of the equation when it comes to working out whether you will be better or worse off financially in Spain. The next step is understanding how much you will be able to earn, as if the average salary is significantly less than the cheaper cost of living, then your quality of life may not improve at all.

Salaries are Less in Spain

To give you a general understanding of how much you may be able to make in the country, Compare My Move crunched some data provided by Numbeo. This showed us that although the cost of living may be much lower than in the UK, on average the salaries are also 56.04% less than you may expect to earn here.  This means that you should be careful when you move to Spain, to ensure that the lower earning potential doesn’t put you at a disadvantage in your buying power.

If you want to move to the country, but aren’t able to earn as much as you would need to maintain your lifestyle, then you may consider a change in career. Many of the top paying professions in the country are the same as here in the UK. An airline pilot may earn up to €120,000 as a starting wage and medical professions such a surgeons can earn as much as €100,000 a year. some professions are comparatively better paid than those in the UK. Considering the living costs, engineering project managers that can earn around €60,000 and ICT Directors that can earn around €50,000 are in a good position to increase their quality of life by living in Spain.

Where to Work in Spain

Unsurprisingly, the most densely populated regions in Spain where expat Brits are working are in the south of the country. This is likely due to what the areas provides them with such as a more relaxed way of life and warmer climate year round. The two most densely populated regions are those of Alicante and Malaga, both of which we have already identified as two of the cheapest areas to live in the country. Other very popular areas in the country include Murcia, Almeria, Madrid and Barcelona. These areas are not necessarily as cheap to live in, but are likely to provide better job opportunities with higher salaries.

For more information about where to work and live in Spain, plus information on healthcare and transport, check out our guide to moving to Spain from the UK.

Compare My Move in Spain

We hope this article has informed your plans, and that you've costed up whether moving to Spain is financially viable.