12 Official Residences From Around The World

Removal company experts Compare My Move explore the weird and wonderful houses of world leaders and heads of state from across the world. Is your favourite the understated yet historically rich Bessastaðir of Iceland? Or the twelfth century castle home to the Princely family of Liechtenstein? Whether you're looking for silk wallpaper, golden door handles, or 190 acres of garden to explore, many of these homes are truly fit for kings and queens.

From the terraced house of 10 Downing Street, to the largest residential palace in the world in Brunei, these are the properties that world leaders call home.

10 Downing Street is the iconic home of the Prime Minister of the UK, currently occupied by Theresa May. The building was originally built in 1684 by Sir George Downing and has been an official residence since 1735. The modern 10 Downing Street has spread out across the street, and is connected to a larger building behind it. Another famous resident is Larry the cat, who has the official title ‘Chief Mouser to the Cabinet Office’.

Al Alam Palace is one of six official residences owned by the current Sultan Qaboos of Oman, though is favoured as his ceremonial palace. The site has a long history with Sultans spanning 200 years, but it was rebuilt in 1972 in its current unique form. It’s built on the former British Embassy with its name translating as the 'Flag Palace'. The Al Alam Palace is flanked by two 16th century Portuguese forts.

The Élysée Palace is the residence of Emmanuel Macron, President of France. The palace is a prime example of the French classical style, and was built in 1722. It became the official residence of French Presidents in 1873, and currently employs around 800 members of staff.

Jubilee House has been the official residence of the President of Ghana since it was built in 2008, costing $135 million (around £105 million) to construct. The building’s unique shape is inspired by the traditional Ghanaian royal stool, and its current occupant is President Nana Akufo-Addo.

There's been some controversy surrounding its name, changing between Flagstaff House and Jubilee House since its construction.

The White House is the instantly recognisable home of the President of the USA, with its current occupier being Donald Trump. It’s been the official presidential residence since construction was completed in 1800. Previously known as the ‘Executive Mansion’, the ‘White House’ was only a nickname until it was officially renamed in 1901 by President Theodore Roosevelt. Staff have to act quickly on Inauguration Day, as they only have 12 hours to clean the home and move the new President in.

The Istana Nurul Iman is the home of Hassanal Bolkiah, the Sultan of Brunei. It’s been called the largest residential royal palace in the world, which may not be a surprise when you consider it has 1,800 rooms and cost £1.1 billion to build. It was built in 1984, and also acts as the site of the Brunei Government. Intricacies include golden door handles throughout the palace.

The castle can be dated back to 1322 in written records, but was nearly completely destroyed after a fire in 1499. In modern times, it is the private home of the Princely Family, but once a year the residents of Liechtenstein are invited to share beer in the castle grounds as part of their national day.

The huge Presidential Complex is the official residence of the President of Turkey, and was built in 2014. It’s the presidential palace of current President Recep Tayyip Erdoğan, and reportedly cost £365 million to construct. The palace is built on 1.6m sq ft of land, and contains 1,100 rooms, 250 of which are for sole use of the president and his family.

Home to the King of Belgium, the Castle of Laeken was designed by renowned French architect Charles de Wailly and built between 1782 and 1784. It has been the royal residence since Belgium’s first King was crowned in 1831. The current occupant of the private residence is King Philippe of Belgium.

The Royal Palace in Phnom Penh is the home of the King Norodom Sihamoni of Cambodia. A network of seperate buildings, the Royal Palace has been the royal residence since it was built in 1866. The floor of the Throne Hall is paved with 500 solid silver blocks, and its golden tower at the centre reaches 59 metres high.

The Rashtrapati Bhavan is the official presidential residence of India, with President Ram Nath Kovind its current occupant. The residence is huge, with the building covering 5 acres of land and containing 2.5km of corridors. The whole presidential estate covers 330 acres, including 190 acres of gardens. It was finished in 1929, and took 29,000 skilled craftsmen 17 years and 700 million bricks to complete.

Bessastaðir is the home of the President of Iceland, and is currently home to President Guðni Th. Jóhannesson. It’s been an official residence since it was donated to the state in 1941, but the site has been linked to the very founding of Iceland. It’s thought that the first settlers of Iceland were on Bessastaðir, and it has been the site of a church since around 1000 AD. The building itself was the site of the only school in Iceland from 1805 to 1846.

Which Residence is Your Favourite?

Which is your favourite official residence from around the world? Does the unique construction of the Sultan of Brunei’s Istana Nurul Iman residence take your fancy, or does the bold colour scheme of the Al Alam Palace in Oman give you inspiration for your next home project? Let us know on Twitter or Facebook. 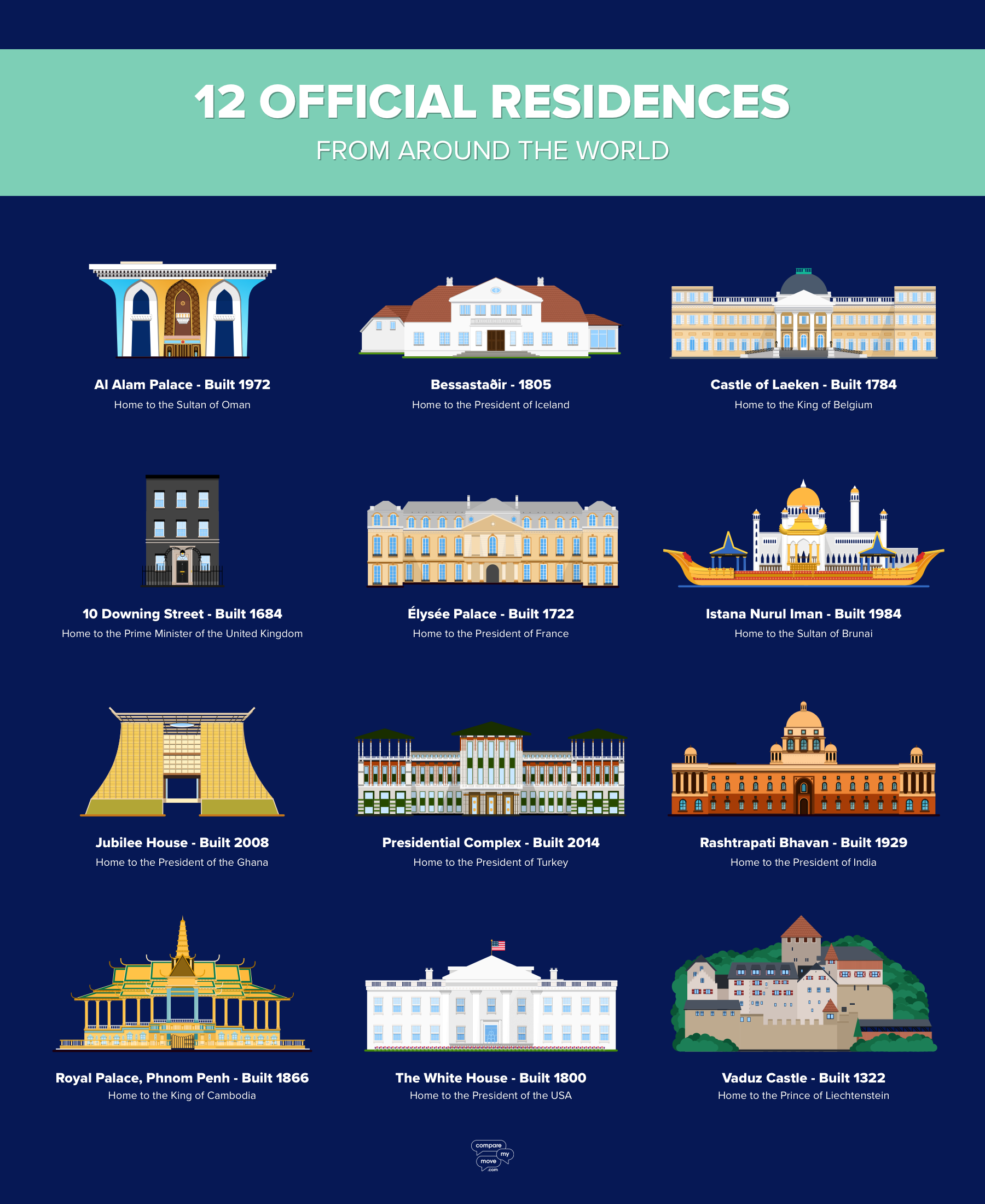