After their retirement, both Tim and his wife, Anne, were living in London, aiding their local community through volunteer work. However, as they weren’t native Londoners, they soon grew tired of the hectic city and decided to explore a completely different way of life. This resulted in a long and continuous moving journey that Compare My Move just had to help with.

Once he hit his 62nd birthday, Tim retired from his accounting career, with his wife soon following closely behind. “I’m retired, I was an accountant working in charities and in further education colleges,” he explained. “My wife and I have been together for 16/17 years, but we got married 5 years ago. My wife was an HR Manager [before retirement].” The couple had lived happily in Croydon for over 12 years, completing a range of volunteer work for their local community. “I did a huge amount of voluntary work with Diabetes UK because I’m Type 1 diabetic, and was doing a lot of work with other charities, helping them with their accounts.”

However, after re-evaluating their mortgage and feeling a little out of place in the big city, they decided it was time for a change. “I come from Deepest Wiltshire, Salisbury and my wife comes from Liverpool,” Tim told us. “Her mother is now 88 and we knew that she needed more care. Driving [to Liverpool] from Croydon was a nightmare, and we didn’t want to live in London because we’re not Londoners by birth. So we decided to up sticks and move.”

Due to their shared love of walking and breathtaking scenery, Tim and Anne knew exactly where they wanted to move before they even began searching. By March 2020, they were even all packed up and on their way. “So when we sold the house, we moved into a rented house in North Wales for 9 months.” With their family still close by, it was the perfect area to anchor down. “We've always loved North Wales and we wanted to be near the sea and just wanted to be out of London...We travel around, we love walking. We did Hadrian's Wall Walk, which is 84 miles and the Isle of Wight which is 75 miles. So we do lots of things like that and up here, it's really nice for that sort of thing.”

However, despite the obvious love for North Wales, narrowing down a more specific location was a little difficult. “We liked North Wales, but we didn't have a [opinion] for where we’d want to be. So we thought, well, given the problem with lining everything up, it's probably easier to rent first,” Tim explained. And so, their moving experience began with a long journey from Croydon to Caerwys where they would temporarily rent a home until they found the perfect property. “We travelled and looked around a lot. We went to all of the coastal areas Colwyn Bay, Conwy, all around.”

However, finding a suitable home to rent whilst caring for 2 cats isn’t easy, meaning Tim and Anne had a tough time negotiating with landlords. “I would say less than 10% of people/landlords take pets. And so, yes, it was a real, real struggle to find the right place. It gave us very limited choices...” However, they had always planned to buy a house once they found a suitable area - renting had always been a temporary plan. This meant that negotiating the terms of the lease wasn’t too worrisome. “They had terms put into the lease that we’d have to have everything cleaned, all the carpets cleaned professionally and replace a carpet if the cats clawed it. It's just one of those things.”

Once they found a pet-friendly landlord, it was time for the big move! As it was a fairly long distance, they had to find a removal company as early as possible to ensure everything was organised before their completion day in March 2020.

Luckily, they soon found Compare My Move. “It gave us great help in identifying removal firms who were interested in this major move that [had to take] place over 2 days,” Tim said. “There were many variations in price and services...Compare My Move was super helpful in making the house move simple, successful and happy.”

The website was so helpful, in fact, that it allowed Tim and his wife to create a new system that would help them choose the perfect removal company. “We then had a kind of a system where we reviewed the people who came to see us. [We reviewed them] on price, on what we thought of their representative, what we thought of the company by Google reviews and [we looked] at the moving site to see what the reviews said too.” It was a detailed and thorough system that ensured they were choosing a verified and fully insured company.

The user reviews and insightful partner pages presented on the Compare My Move website were also an important source of information for them. “We then had a list where we [again] rated them on price... and how quickly the replies came...We had a piece of paper which we awarded points individually to those and then came out with who we thought was the best.” That number one position went to our removal partner, City Removals & Storage.

City Removals & Storage are a London-based removals company that has been with Compare My Move since 2016 - that’s over 5-years within our trusted network! They are an accredited member of the British Association of Removers (BAR) and offer a range of professional moving services that will ensure a stress-free and seamless house move. During their time within our network, they have received an impressive 5-star rating from our users.

“We came up with City Removals and they just came in, packed everything and did everything on time as planned. It was really good. We were absolute in giving them a 5-star review...everything they said would happen, happened. They were great.”

With the date set and the removal company organised, it was finally time to get going. Luckily, Tim and Anne’s house move was booked right before the Covid outbreak in 2020, meaning their personal moving experience wasn’t massively affected or delayed. “I left early in the morning with the cats on board, brought them up to a cattery up here. Anne stayed down there and supervised the move and then came up by train, I picked her up from the train station,” Tim explained. “City Removals did the packing for us but we had to clear the unwanted things first...we simply had too much stuff!”

Due to the journey being over 260 miles long, the move took place over the course of two days. But the removal company was incredibly helpful and didn’t mind the distance. When asked to describe their experience with City Removals, both Tim and his wife stated, “They were so polite, always on time...They put down flooring to protect the carpets and did everything exactly as planned. They even took down Ikea furniture and re-assembled it. They were simply great!”

Afterwards, it didn’t take long for Tim and his wife to settle into their new accommodation and lifestyle. “There's no pressure, no traffic jams. Where we lived before, although we weren’t on the main road you could always hear the police cars and fire engines going up and down the road and it was always busy.” Tim described how they had both “had enough” of the hectic city when living in Croydon, making this quieter and calmer home feel like a haven. “It's just quieter and more easygoing. Traffic jams are a thing of the past.”

Since their move in 2020, Tim and Anne have continued their long-term plan, leaving the rented home in Caerwys. They have since bought a beautiful 4-bed house in Prestatyn which is much closer to the coast and only a 20-minute journey from their previous location. You’ll be happy to know that the cats have also settled in well and are now free to claw to their hearts’ content.

When reflecting on their home in London, Tim stated, “This is much, much bigger than the other house and it's less than half the price. It's just a different way of life. Everybody talks to you and it's friendly and it's got a lovely environment, we can walk to the beach in 20 minutes...We always loved Prestatyn. It's just a nice place to live.”

If you’d like to join the many happy movers Compare My Move has helped over the years, then don’t forget to take a look at our other insightful articles and guides to ensure you’re organised before the big day. With a few simple details, we can help you compare conveyancing, surveying and removal quotes, connecting you with the best professionals in your local area. 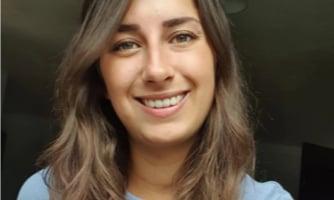 “They were the first to contact me and no one else seemed to be able to match their price - They kept really good communication. They were great before and they were great on the day, really friendly, really professional and got everything done with no issues.”